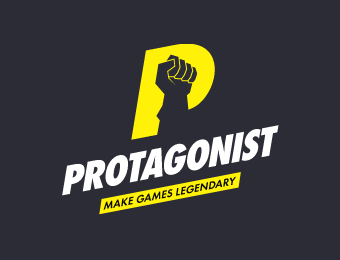 PROJECT: Name a feature-based web and app crowdfunding tool that enables independent game studios to engage, interact, and monetize their communities in a new way.

PROTAGONIST: An advocate, leader, proponent, or champion of a particular cause, idea, or movement. The leading character in a drama, film, novel, game, or other fictional work.

BRAND POSITIONING: A Protagonist is the leading character at the center of a story, typically making the key decisions that drive the plot forward, the perfect name for this service that is the heroic champion of video game developers. Antagonists will throw down obstacles, create complications, and inflame conflicts that test the Protagonists who use this tool, thus revealing the strengths of each developer’s character. In ancient Greek drama a Protagonist was the first actor to engage in dialogue with the chorus, so the name also maps metaphorically to this crowdfunding tool that enables game studios to engage with their chorus of players, fans, and patrons in an exciting new way.

“They are experts in their field. Their knowledge and approach are apparent on their website, but powerful when experienced first-hand. Anyone can find a name in the dictionary, but finding a brand name requires art and craft expertise, both of which Zinzin delivers…. They may only specialize in naming, but they do it well. We couldn’t ask for anything more.”
—CEO, Protagonist