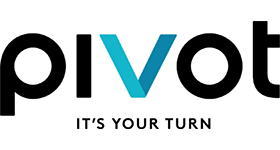 PIVOT: Beyond just turning and rotating, Pivot is the one central thing that something — maybe everything — depends upon. It can be a structured course correction or a re-alignment of priorities. Pivot is all about thinking on your feet, adaptation and informed change. Also connotes pivotal, as in being of critical, essential importance.

BRAND POSITIONING: The Pivot brand is empathetic, and connotes the dance of collaborators — auteurs and audience — learning to work together, to understand and inspire each other. The Pivot network doesn’t strong-arm or browbeat you, it uses compelling, entertaining stories to get the audience to gently pivot in their thinking, and to inspire them to action.

Explaining the thinking behind the new network’s name and brand position, Pivot president Evan Shapiro says that “the world is on a path right now, but there are many different paths that we can choose. We’re not necessarily saying which one’s the right one, but we know where we’re headed right now is not working. So it’s time to shift, and it’s time to pivot.”

Here is a promo video that introduces the network and it’s new shows and content features:

The world is changing, and Pivot will be right there in the middle of that change. And with its innovative digital distribution strategy, Pivot may just turn the television industry upside down as well. The name Pivot is perfect for this ambitious network that is both television and post-television. The old ways of thinking, acting and relating to each other and the world are not working anymore. It’s time to Pivot.

“Their [Zinzin’s] team was excellent. Everything was on time. They also did a good job of explaining upfront how long each phase was going to take. The process went really smoothly. I’d never done a naming exercise before, so they gave me a lot of good advice throughout.”
—Former EVP Marketing, Participant Media / Pivot