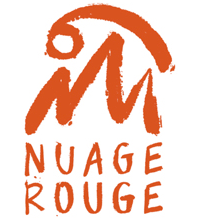 PROJECT: Rebrand a Montreal-based artisanal gourmet food service for cafes, bars, and microbreweries. French is the dominant language in Quebec, and by law all commercial signage in Montreal must appear in French. So the new name had to work first in French, but also translate well into English.

NUAGE ROUGE: The English translation is “Red Cloud.” A nuage rouge / red cloud sunset occurs when unique atmospheric conditions turn the sun and the surrounding sky an intense red. Red Cloud is also the name of a powerful Native American warrior and chief of the Oglala Lakota from 1868 to 1909.

BRAND POSITIONING: The client came to us after they outgrew the restrictive misnomer of their original name, Tablée Terre, which most people interpreted to mean “from the land to the table,” rather than intended meaning, “family table.” People assumed this was a company that delivered farm-to-table produce, not pre-prepared gourmet foods. The client realized that this was a perfect opportunity to not only change their name, but create an evocative brand narrative that meshed with their passionate and disruptive spirit.

Nuage Rouge is the perfect metaphor for an eclectic fusion of French, Cajun, Belgian, Spanish and South American cuisine. The vision for the kitchen was inspired by the ethos and food preparation techniques of a community of Trappist monks which settled in Quebec in the early 20th century. The Trappists deeply believe in the power of work and the creation of goods. The 48th chapter of the Rule of St. Benedict states, “for then are they monks in truth, if they live by the work of their hands.” Nuage Rouge shares this deep commitment to the land, food, and the spiritual powers of honest craft.

But the brand also has a more playful and wild side that is invoked by its philosophical associations with the Trickster archetype. The Trickster in Native American mythology is a spirit or anthropomorphic animal who plays tricks or otherwise disobeys normal rules and conventional behavior in order to raise awareness, and acts as an equalizer and catalyst for change. Tricksters can be cunning or foolish or both; they are often funny even when considered sacred or while performing important cultural tasks. The mission of Nuage Rouge is to disturb the conventional bar food paradigm with its rustic and sustainable approach to food preparation, delivery, consumption and package recycling. Another unique and disruptive aspect to Nuage Rouge is that their products can pop up anywhere, anytime and in any form just like a mischievous Trickster. Or a cloud. In fact, you might think of them as the first cloud-based kitchen in Canada. Perhaps the entire world.

“The team was perfect. I am amazed by their expertise and the quality that they delivered. They’re like the wizards of naming, truly capturing our company’s look and feel within a few words.”
—President, Nuage Rouge