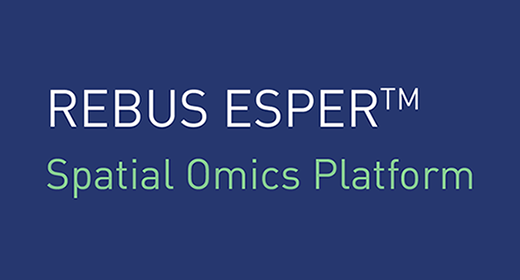 ESPER: An ESPer, one who has ESP; Latin spērāre, present active infinitive of spērō (“hope, expect”); Spanish, Portuguese: Esperar: to hope for, hope to; French: Espérer: to hope; Esperanto: Esperi: to hope. Vesper: the evening star, especially Venus; Hesperus. The word esperanto translates into English as “one who hopes.” Esper Photo Analysis, from the 1982 film Blade Runner, is a device that can find remarkable levels of detail from a photograph. Deckard obtains a photograph belonging to a replicant; he places the photo in the device, which allows him to zoom in and change focus almost indefinitely.

BRAND POSITIONING: When the company Rebus (formerly Optical Biosystems) hired Zinzin to rename its company, we also had the opportunity to name its flagship product, a fully integrated, automated spatial omics platform that delivers quantitative single-molecule, single-cell data with subcellular resolution. In other words, this platform needed a name that reflects its remarkable capabilities to unlock breakthroughs in neuroscience, cancer, infectious disease, immunology, and developmental biology.

The name Zinzin created, Esper, functions well as a more abstract, invented name, but it actually has some great meanings and backstory behind it. Closely related to multiple romance language words for “hope,” and the root of the “international language” Esperanto (“one who hopes”), this meaning is all about delivering on the great hope of “spatial omics without compromise.” Esper is also closely related to “vesper,” the evening star, with connotations of finding a specific “dot” of illuminated meaning in a vast universe of objects. The name is also, literally, ESPer, “one who has ESP,” so it brings in all the connotations of ESP about having “extra-sensory” perception within cells, but in a subtle, non-obvious way. And for SciFi/film geeks, this name comes from the “Esper Photo Analysis” scene in the original Blade Runner film, a perfect metaphor that maps directly to finding valuable information hidden in an image through a “futuristic” combination of optics and sophisticated algorithms, another way of saying, in the words of Rebus CMO Erin Davis, that Esper creates “magical portals into the biology of tissues.”

To discover how Zinzin also renamed the company that created Esper, visit our Rebus case study.

“We’ve had a great reaction from the stakeholders we’ve dealt with so far. We’ve received really positive feedback from our CEO and board of directors. Potential new investors thought it was a really cool name too. The name is evocative enough that people have asked about it. We put out a press release and one of the reporters I spoke with specifically asked what our name meant. I was able to explain how we chose our name because we worked with Zinzin. That question also gave us an opportunity to explain our vision for the company, which was a really great win for us.”
—Erin Davis, Director of Marketing, Rebus Biosystems