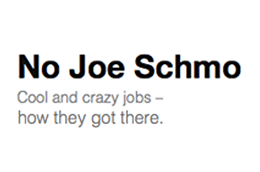 According to Jay Jurisich, quite a lot. An emotional connection, separation from the competition, a unique positioning platform, a positive engagement with the audience. For starters.

Jurisich is the creative director at San Francisco-based naming and branding agency Igor International [now Founder / Creative Director of Zinzin], which has worked with clients ranging from TV networks to oil and chemical companies. The most important factor in choosing great name is demonstrating your brand and values, Jurisich says. Bad ones resort to advertising to explain what they actually do.

Over the past five years, Jay Jurisich has filled 4,050 pages of Moleskine notebooks with ideas for names. In the [Zinzin] Naming Guide, he explains the company’s six-step process and four categories of names, from the super-boring (think: The Naming Company) from the metaphoric (think: Apple).

Position: Creative director and co-founder (2002 [Igor; 2011, Zinzin])
Age: 48
Salary: Project-based, with up to six projects per month.
Typical naming cost: $20,000 to $35,000 for products; $35,000 to $50,000 for companies.
Graduated from: College of Creative Studies at UC Santa Barbara, Bachelor’s degrees in literature and art studio; UCLA, Master’s degree in fine arts
Based out of: San Francisco, Calif.
Previous jobs: [Co-founder/Creative Director of Igor]; Founder of Wordlab.com, a free naming and branding website with community discussion forums; editorial director at A Hundred Monkeys, a brand naming company based in Mill Valley, Calif.

How he got the job: Before landing at A Hundred Monkeys, I was out of work for five months, completely broke, with a wife and two small kids. But I was working on Wordlab every day, putting out over 25,000 names and taglines for free, constantly writing and creating a community. A Hundred Monkeys noticed and hired me. Then, we created Igor. We had no clients and no portfolio to speak of, and it took us three months to get our first client. But then it really took off.

[Zinzin]’s role in the market: We name the brand positioning, not the direct product or service. That is, we’re naming the brand’s unique tone, spirit, and personality. Apple’s positioning was creating user-friendly computers in a world of giant IBMs that filled up the room. They could have named themselves “Simplicity Computing,” which is direct, but it’s over the top and obvious. It’s like saying, Trust me, I’m honest. Only dishonest people say that. The concept of an apple has thousands of years of rich shared cultural history.

Do you have a specific brainstorming process? You can’t confine it to an hour or a day; it’s ongoing. Don’t approach naming like sitting down in front of a thesaurus or glossary. The best people are always thinking about it, and it’s part of who they are. There’s no punching the clock.

When you find something, is it just…ta-da? A brand is born? We typically present 15 to 20 pre-screened names to the client in the first of three rounds, and then discuss them one by one.

Length of each naming process: 4 to 5 weeks. If we worked all day and night, we could do an entire project in a week, but that’s really shortchanging the process. You need time to live with the names, think about them at night, in the shower, at dinner with your wife.

A great name has: A naturally creative response. You’ll start imagining everything you can do with it. It should make you sit up and pay attention, stop in your tracks and say, what is this? Like Snapple, or Oreo. If you don’t hook a person with a great name off the bat, you’ve lost them.

Name you’re proudest of: Gogo, a wi-fi broadband service on airlines. It’s short, energetic, and all about travel, in a fun, sexy, and distinct package.

The key to good branding: Demonstration.What you fail to demonstrate with a name and brand, you have to make up for by spending a lot of money explaining it with advertising. Every company that hires us says their product is new and innovative. So we say, you need to have a name that demonstrates you’re new and thinking outside the box.

What drew you to the industry? I’ve always wanted to elevate the conversation and quality of names out there. There are so many horribly mish-mashed or boring brand names, when they should be fun and joyful.

How would you qualify a “bad” name? If it’s easily forgotten. There are basically four types of names:

What’s a great name you’ve come across recently? An Australian company, Crumpler, sells a camera strap called Industry Disgrace. Only a brand that is very good and secure in what they’re doing can call their product something like that.

How did you arrive at the name “Igor”? A naming company having to name itself is scary and self-referential. It’s kind of like the movie Being John Malkovich, when John Malkovich goes inside his own head. There’s a big irony that naming companies can’t think of good names for themselves, exemplified by agencies with names like Namestormers, Name Razor, and Brand DNA. Igor, on the other hand, refers to the hunchback idiot in Young Frankenstein, the idiot who screwed up the whole project. We purposefully wanted a name with strong negative connotations, to prove to potential clients that even very edgy names, if they support the brand positioning, can be very successful. And our positioning is more along the lines of, the ultimate assistant, or we’ll do whatever it takes to bring your brand to life.

Best part of the job: Thinking of a great name and having a client sign off on it. The first is the joy of conception, the latter is like giving birth. Neither happens without the other.

Worst part of the job: When clients don’t “get it” and require lots of extra meetings to go over the same ground. The downside of owning your own company is being on call all the time.

Your biggest flaw? Being too nit-picky. I wish I could just crank out work and not care about typos.

Best career advice? Don’t wait for others to give you permission to do something. If you can’t get a job, go out and create the job you want, and then take down the companies that refused to hire you.

Jay Jurisich suggests three ways to hone your skills for the branding industry.

1. Start creating names, even if it’s just for your friend’s band or startup company, and begin assembling a portfolio. In the meantime, learn web development, coding, and programming skills. These are all extremely useful ways to make money as a side or temporary job; many small companies can’t afford to hire expensive web developers.

2. Create a web presence for yourself. If you have something to say about naming, start a blog or build a website. We get resumes all the time, and it’s much more interesting to see a project a candidate is working on – like a website – than items on their resume. I can tell a lot from someone’s website: design sense, writing skills, work ethic. Building a site isn’t the only thing you can do, but it’s a handy, visible tool that can be shared anywhere.

3. Create social networks with people in the industry. Hunt down branding companies on Twitter and retweet their tweets, mention them, get on their radar. You can even communicate directly through Twitter with specific people at companies you’d like to work for.

You can follow Jay on Twitter at @Jurisich, check out his artwork on Jurisich.com, and find out more about the industry on Zinzin’s naming blog.

« Why would a company change its name?
The name game: Play it right »