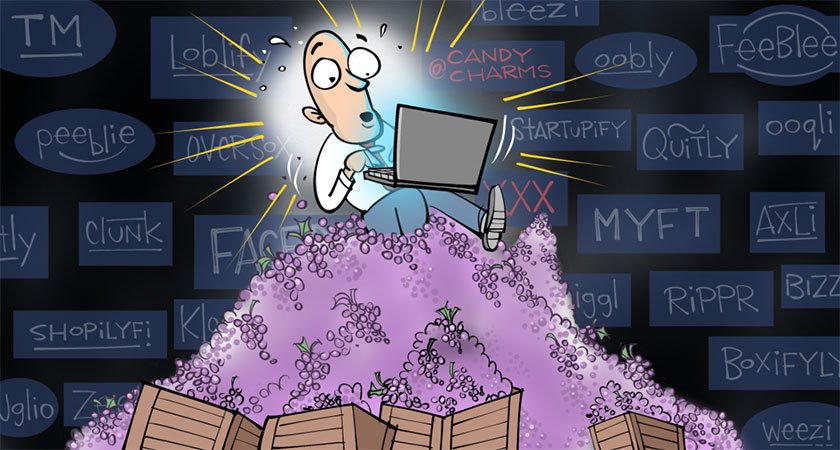 Listen to the audio of this radio piece here.

‘People are very creatively searching for an answer to this problem, which is, there are not enough unique combinations of letters in our lexicon.’
Jay Jurisich, CEO of Zinzin

Jay Jurisich runs Zinzin in Berkeley, one of the many companies trying to help businesses stand out in the sea of names.

The profusion of brands has gotten totally overwhelming, Jurisich said. “It’s the whole capitalist dystopia. Too many companies, products, brands. … You can’t keep track of it all.”

Businesses pay tens of thousands of dollars to companies like Zinzin for the increasingly challenging task of unearthing catchy, unclaimed brand names.

There are now over a million trademarks, just for tech companies and their products alone. That’s almost double the number of words in the entire English language — which, by the way, is about 470,000 — even including the archaic ones, like thee, thou and dost.

“People are very creatively searching for an answer to this problem, which is, there are not enough unique combinations of letters in our lexicon,” Jurisich said.

The internet started a wildfire in the world of names, he explained. Then, the proliferation of startups and all the related apps and products, many of which may never even make it to market, have fueled that blaze.

Today, a small business might end up having to compete with a giant company like Google or Juul for a good name, or might be thwarted by a new startup that has quickly trademarked a trove of good options.

Jurisich jokes that you could have a drinking game where you take a word, any word, drop a vowel or two, and search for it online. If it’s a company, you take a drink. Chances are, you’re going to get drunk very quickly.

Of course, creative naming is nothing new, said David Placek, who heads Lexicon Branding, a company in Sausalito. Businesses like Flickr and Lyft, he noted, are actually copying older American brands who took creative license with spelling.

Think of Trix cereal, which started in the 1950s. Or Infiniti, a line of cars that’s spelled with an I at the end instead of a Y, that Nissan put on the market in 1989, two decades before anyone had even heard of Lyft.

Like it often does, Placek said, Silicon Valley is just amplifying a longstanding trend in capitalism. The more stuff that’s made, the more abstract companies have to get with their names to stand out from the crowd.

Names used to be a lot more literally connected to a company’s products and services, Placek said. “Long gone are the days of Craftsman tools or DieHard batteries.”

Now a name has to work as a website domain, in social media and in multiple languages. It needs to fit on a tweet and hold up in places as disparate as, say, Alabama and Algeria.