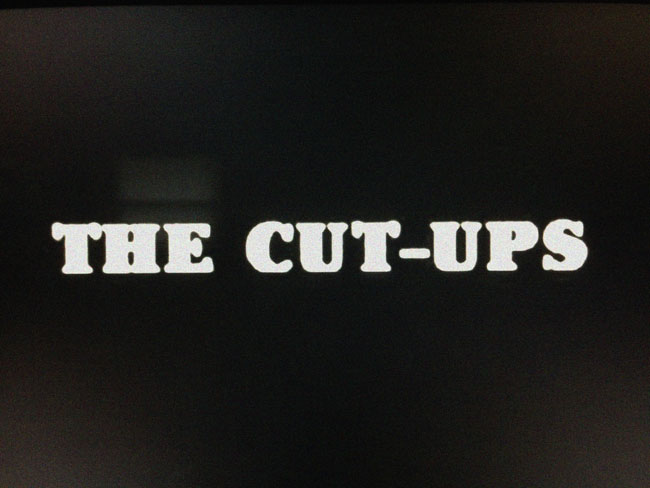 Bowie cuts it up with Burroughs

In 1974, Bowie read Nova Express by William S. Burroughs, met with Burroughs (Beat Godfather Meets Glitter Mainman, Rolling Stone, February 28, 1974), and was influenced by Burrough’s “cut up” writing technique. Here are Bowie’s cut up lyrics for “Blackout,” which appears on the 1977 album Heroes:

Oh you, you walk on past
Your lips cut a smile on your face
Your scalding face
To the cage, to the cage
She was a beauty in a cage

Too, too high a price
To drink rotting wine from your hands
Your fearful hands
Get me to a doctor’s I’ve been told
Someone’s back in town the chips are down
I just cut and blackout
I’m under Japanese influence
And my honour’s at stake

The weather’s grim, ice on the cages
Me, I’m Robin Hood and I puff on my cigarette
Panthers are steaming, stalking, screaming

The inspiration of dreams

In an excerpt from Beat Godfather Meets Glitter Mainman, Bowie and Burroughs discuss the importance of dreams in their work:

Burroughs: Do you get any of your ideas from dreams?

Burroughs: I get seventy per cent of mine from dreams.

Bowie: There’s a thing that, just as you go to sleep, if you keep your elbows elevated you will never go below the dream stage. And I’ve used that quite a lot and it keeps me dreaming much longer than if I just relaxed.

Burroughs: I dream a great deal, and then because I am a light sleeper, I will wake up and jot down just a few words and they will always bring the whole idea back to me.

Bowie: I keep a tape recorder by the bed and then if anything comes I just say it into the tape recorder. As for my inspiration, I haven’t changed my views much since I was about 12 really, I’ve just got a 12-year-old mentality. When I was in school I had a brother who was into Kerouac and he gave me On The Road to read when I was 12 years old. That’s still a big influence.

The cut up method

The cut up method of writing that Burroughs and Brion Gysin invented in 1959 can perhaps be thought of as conjuring the dream state of any piece of text. Burroughs described the process in The Cut Up Method (1963), and included at the end of his essay a cut up version of what he had just written, which perfectly demonstrates the process and its poetic value:

ALL WRITING IS IN FACT CUT UPS OF GAMES AND ECONOMIC BEHAVIOR OVERHEARD? WHAT ELSE? ASSUME THAT THE WORST HAS HAPPENED EXPLICIT AND SUBJECT TO STRATEGY IS AT SOME POINT CLASSICAL PROSE. CUTTING AND REARRANGING FACTOR YOUR OPPONENT WILL GAIN INTRODUCES A NEW DIMENSION YOUR STRATEGY. HOW MANY DISCOVERIES SOUND TO KINESTHETIC? WE CAN NOW PRODUCE ACCIDENT TO HIS COLOR OF VOWELS. AND NEW DIMENSION TO FILMS CUT THE SENSES. THE PLACE OF SAND. GAMBLING SCENES ALL TIMES COLORS TASTING SOUNDS SMELL STREETS OF THE WORLD. WHEN YOU CAN HAVE THE BET ALL: “POETRY IS FOR EVERYONE” DOCTOR NEUMAN IN A COLLAGE OF WORDS READ HEARD INTRODUCED THE CUT UP SCISSORS RENDERS THE PROCESS GAME AND MILITARY STRATEGY, VARIATION CLEAR AND ACT ACCORDINGLY. IF YOU POSED ENTIRELY OF REARRANGED CUT DETERMINED BY RANDOM A PAGE OF WRITTEN WORDS NO ADVANTAGE FROM KNOWING INTO WRITER PREDICT THE MOVE. THE CUT VARIATION IMAGES SHIFT SENSE ADVANTAGE IN PROCESSING TO SOUND SIGHT TO SOUND. HAVE BEEN MADE BY ACCIDENT IS WHERE RIMBAUD WAS GOING WITH ORDER THE CUT UPS COULD “SYSTEMATIC DERANGEMENT” OF THE GAMBLING SCENE IN WITH A TEA HALLUCINATION: SEEING AND PLACES. CUT BACK. CUT FORMS. REARRANGE THE WORD AND IMAGE TO OTHER FIELDS THAN WRITING.

If you find yourself in London soon, check out the exhibition David Bowie is at the Victoria and Albert Museum (modestly, “The world’s greatest museum of art and design”), 23 March – 11 August 2013:

The V&A has been given unprecedented access to the David Bowie Archive to curate the first international retrospective of the extraordinary career of David Bowie – one of the most pioneering and influential performers of modern times. David Bowie is will explore the creative processes of Bowie as a musical innovator and cultural icon, tracing his shifting style and sustained reinvention across five decades.

The V&A’s Theatre and Performance curators, Victoria Broackes and Geoffrey Marsh have selected more than 300 objects that will be brought together for the very first time. They include handwritten lyrics, original costumes, fashion, photography, film, music videos, set designs, Bowie’s own instruments and album artwork.

Jed Birmingham wrote a great article a couple years ago, Black Mountain Review: Reports from the Bibliographic Bunker, about William S. Burroughs and his appearance in The Black Mountain Review in the late 1950s. The Review was the art and literary journal of Black Mountain College, the experimental liberal arts college that existed in North Carolina from 1933–1957. Here is Birmingham’s description:

Founded by progressive educator John Rice in 1933 near Asheville, North Carolina, by the late 1940s, Black Mountain College attracted key figures (or soon to be) in the experimental arts: John Cage, Merce Cunningham, Josef and Anni Albers, David Tudor, Clement Greenberg, Charles Olson, Robert Rauschenberg, Franz Kline, and Buckminster Fuller. By 1954, the College was on its last legs. In fact, the winter of 1953/1954 was arguably the lowest point in the College’s history. Out of this winter of discontent grew the idea of a literary magazine. Olson had turned Black Mountain into his own classroom and writers like Ed Dorn, Michael Rumaker, John Wieners, and Fielding Dawson attended the college. Robert Duncan and Robert Creeley along with Olson would teach at the College in its closing years.

There were only seven issues of The Black Mountain Review published, as seen in the seven cover images above. I love these covers, and how the publishers began with the idea of a consistent design template with minimal differentiation, perhaps to create an identifiable “brand,” but by issue five their own artistic and experimental inclinations took over, obviously under the influence of John Cage and Franz Kline, and overthrew the rigid structure. It like a visual representation of a mind expanding. Beautiful.

For large version of each Review cover, and more, see Black Mountain Review: Reports from the Bibliographic Bunker.