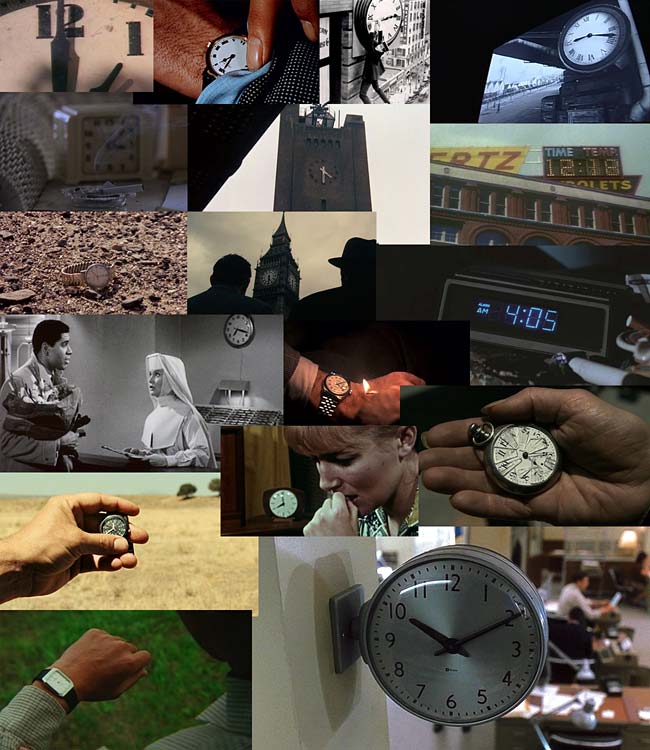 Chances are by now that you’ve heard of Christian Marclay’s brilliant work of art, The Clock (2010), though less likely that you have actually seen it (I haven’t as yet). As described by Wikipedia, the piece “is in effect a clock, but it is made of a 24-hour montage of thousands of time-related scenes from movies and some TV shows, meticulously edited to be shown in ‘real time’: each scene contains an indication of time (for instance, a timepiece, or a piece of dialogue) that is synchronized to show the actual time.”

A lot has been written about The Clock, and from what I’ve read, this is much more than just a collage of film images. The images not only work in sequence as a clock, but the pacing of the editing builds to moments of climax, as the top of the hour approaches, and then to a more relaxed pace after the hour has passed. And the soundtracks of the clips are overlapped and blended across transitions, creating new correspondences and “dialog” between disparate scenes. In short, this is a living, breathing clock, more like a day-long dream (a contemporary Ulysses?) than a typical film, clock, art work, or “typical” anything.

Check out this wonderful New Yorker profile piece by Daniel Zalewski, The Hours: How Christian Marclay created the ultimate digital mosaic. Here is an excerpt about how Marclay transforms the ordinary into art:

Part of Marclay’s fascination with the cinematic archive had to do with the way it resisted transfiguration. It wasn’t hard to turn a recorded sound into an estranged abstraction, by slowing it down or folding it into a new rhythm. But, even if you chopped a film into a single frame, specificity clung to it: Audrey Hepburn, Givenchy, Manhattan, 1961. Marclay wondered if he could fashion from familiar clips a genuinely unfamiliar film, one with its own logic, rhythm, and aesthetics. In his view, the best collages combined the “memory aspect”—recognition of the source material—with the pleasurable violence of transformation. If Marclay could turn the sky green for one day, he’d do it.

Later in the piece, Zalewski offers this observation about the paradoxical nature of time both in The Clock and in the viewing of it:

There were darker resonances, too. People went to the movies to lose track of time; this video would pound viewers with an awareness of how long they’d been languishing in the dark. It would evoke the laziest of modern pleasures—channel surfing—except that the time wasted would be painfully underlined.

… There was a lineage of avant-garde cinema that, with varying degrees of obscurity, examined the temporal qualities of film. Marclay’s contribution to the cinema of duration, though, would be pleasurable to watch. He sensed a creepy challenge. If his film was sufficiently seductive, he might coax people to sit for hours, literally watching their lives tick away.

There are several copies of The Clock owned by museums or private collectors that are in circulation, touring the globe for short-run performances. Be sure to catch all or part of it when it comes to a city near you, and watch your life tick away. I can’t wait. 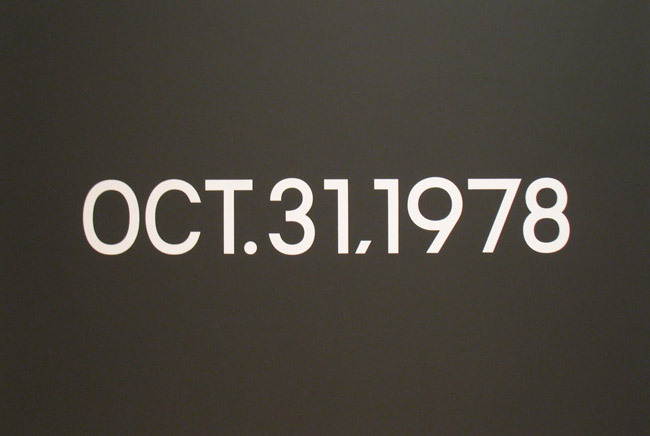 Oct. 31, 1978 is one of more than two thousand “date paintings” that On Kawara has produced since 1966. Though they vary in size, each work shares a similar format—the specific date, which is painted without the use of stencils in white, occupies a central location on the monochromatic canvas and is the painting’s sole image. Utilizing the language of the country where he painted the canvas, Kawara either completes each work on the day emblazoned on its surface or destroys it. While usually not exhibited, a newspaper accompanies every work to document the date and location of its execution. Deceptively simple, Oct. 31, 1978, like all of Kawara’s date paintings, both records and celebrates the simple fact that the artist, and his creative energies, existed at this point in time.
~Source: The Art Institute of Chicago

In the 1930s the composer John Cage learned a valuable lesson the importance of time in the structure of music. In art, as in life, timing is everything:

Yet of all the things in Cage’s Los Angeles years that “set [him] on fire” and shaped his life in fundamental ways, the most far-reaching was his decision, and good fortune, to work as a student with the composers Richard Bühlig and Arnold Schoenberg…. “Bühlig was a wonderful, cultivated man, and he taught me a great deal,” Cage confessed. “The first thing he said, after seeing my music was that I had to learn something about structure.” Bühlig also impressed upon Cage the crucial significance of time and timing: “One day when I arrived at his house half and hour early he slammed the door in my face and told me to come back at the proper time. I had some library books with me which I decided to return, and thus I arrived at his house a half hour late. He was simply furious. He lectured me for two hours on the importance of time–how it was essential to music and must always be carefully observed by everyone devoted to the art.