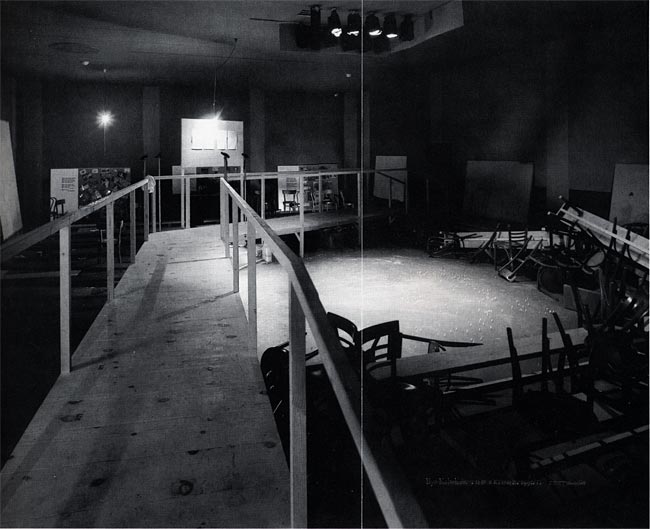 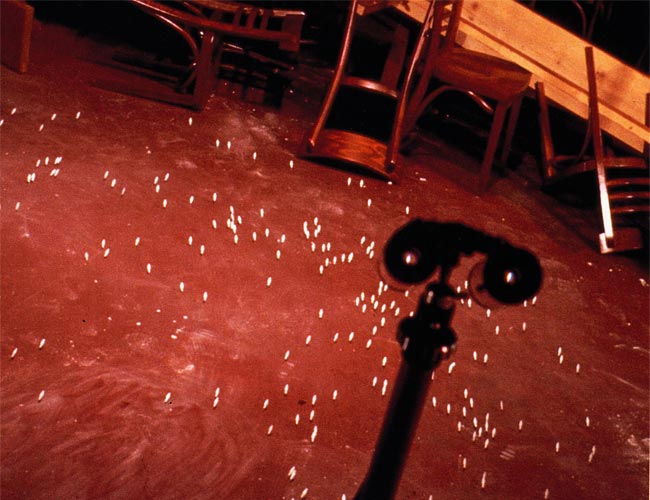 What is going on here? What incident has taken place? It is a mindblowing 1991 installation at The Museum of Modern Art, New York, by the great Russian artist Ilya Kabakov, called The Bridge. Below are some excerpts from the book, Ilya Kabakov: The Man Who Never Threw Anything Away, 1996, by Amei Wallach, describing this strange and haunting installation:

Passing through a small dark corridor, in all two meters long, the viewer opens an old door that has been painted green many times, ascends a slight incline, and winds up on a narrow wooden bridge with handrails suspended above the floor. The viewer walks along this bridge to the center of the room, whereupon the bridge turns to the left, and one can get down from the bridge only through the opposite door, which leads out of the installation. The viewer cannot get off of the bridge and walk around the room: the handrails and the bridge are tightly pressed against the doors, and it is only possible to go in one direction, toward the exit.

In a large room (15 x 10 meters) only the center is brightly lit by an oval of light. The corners and walls of the room are not illuminated, they are immersed in semidarkness. The illuminated center, at first glance, appears to be completely empty. However, just outside the borders of the light one can see all sorts of things in total disarray which have been pushed back against the walls–chairs, wooden benches, boxes, wrapping paper, a table covered with a green tablecloth–and behind all of this, flush against the wall and barely visible in the darkness, stand large and medium-sized paintings that have not been hung. The walls themselves, if one looks closely, are divided at even intervals by vertically hanging red panels, which lend the entire area a sort of pompous air, and the very color of the walls and the table holding a carafe containing water and glasses all indicate that, to all appearances, what we have before us is an official area intended for solemn occasions. But why are there such disorder and chaos in it?

A wooden board with an explanation is affixed in the center of the bridge at the very place where it turns toward the exit, and here the viewer may read to find out what is going on, or more precisely, what went on. From this text (cf. text “explanation” [below]) the plot/theme of the installation becomes clear, as does the significance of the five binoculars available along both sides of the bridge and through which the viewer will definitely look once he has read the text. Having looked through them, one will see that the illuminated circle on the floor, which seemed empty to the naked eye, is really covered in many places with groups of little white men. Their origin and their significance in this installation is still not quite clear, even after reading the “explanation.” Actually, the very installation itself raises these questions: What are these little white men, how did they wind up here, where are they from? And what really happened here? And what’s depicted on the paintings, of which there are many (eighteen) and which cannot be seen on account of the darkness and the chairs which are blocking them?

Wallach continues to discuss concepts in, and interpretations of, The Bridge, and a larger photo and installation diagrams are also included. This is, by the way, and extraordinary and beautiful book, that goes into great detail about all aspects of Kabakov’s work, from illustration to paintings to large installations such as The Bridge.

Here is the text “explanation” of this event that is mounted on the wooden board at the bend in the bridge, the prime viewing are for the “little white men”:

Text in the Installation

In the club of ZhEK No. 8 in Moscow, a place where meetings of the residents of the region are held, lectures are read, and comrades’ courts are convened, an important event it expected to take place at the end of March 1984: the public investigation of paintings which are of a harmful, “burgeois” nature, defaming our Soviet way of life, hostile toward our ideology. Important critics and art scholars were expected to arrive at the meeting. The paintings and posters which always hung on the walls of the club were removed for this occasion and the workers were supposed to begin hanging up the “works” that were being delivered since morning….

Suddenly, someone brought a strange message. On that day, something unusual, or even unheard-of, was supposed to happen in Moscow. Someone, or something, was supposed to appear on that evening, in the city, and not just somewhere, but right in the very middle of this hall which must therefore be vacated immediately for this event.

There couldn’t be any talk of a meeting at all. All the works were instantly pushed to the corners and walls, forming something like a circle in the center.

And the event which everyone anticipated, some with hope, others with disbelief, actually did occur around eleven o’clock in the evening. As to what really happened, the eyewitnesses disagree in the most resolute way. But one circumstance, strange and inexplicable, was obvious: after the event the entire floor in the middle of the hall was strewn with groups of little white people who were constantly changing places….

At the suggestion of the commission which was specially created to look into this, the entire place was left just like it was when the event occurred, and it was decided to build a temporary bridge over this spot, in the first place, as a special precaution, and secondly, for the purpose of observing these strange aliens, which can only be seen through powerful binoculars.

Vladimir Mayakovsky (1893–1930) was the leading poet of Russian Revolution of 1917 and of the early Soviet period. He was, “an individualist and a rebel against established taste and standards, one of the founders of Russian Futurism movement. Originally Mayakovsky planned to become an artist. His early poems have strong painterly visions and sequences in many of his works recall film techniques. Mayakovsky was deeply concerned with the problem of death throughout his life, and in 1930, troubled by critics and disappointment in love, he shot himself with a pocket pistol.” (Authors’ Calendar)

Mayakovsky is often associated with the Soviet regime, and has been in and out of favor because of that, though he did become disillusioned with the Soviet cause by the end of his life. He is not by any means my favorite Russian poet of the era, and I mainly wanted an excuse to post the image of that cool book cover above, but here’s an early Mayakovsky poem from 1913 that I quite like:

I splashed some colours from a tubler
and smeared the drab world with emotion.
I charted on a dish of jelly
the jutting cheekbones of the ocean.
Upon the scales of a tin salmon
I read the calls of lips yet mute.
And you,
could you have played a nocturne
with just a drainpipe for a flute?

Source: Ubuweb has a free download of The Collected Poems of Vladimir Mayakovsky, my source for the book cover image and the poem.