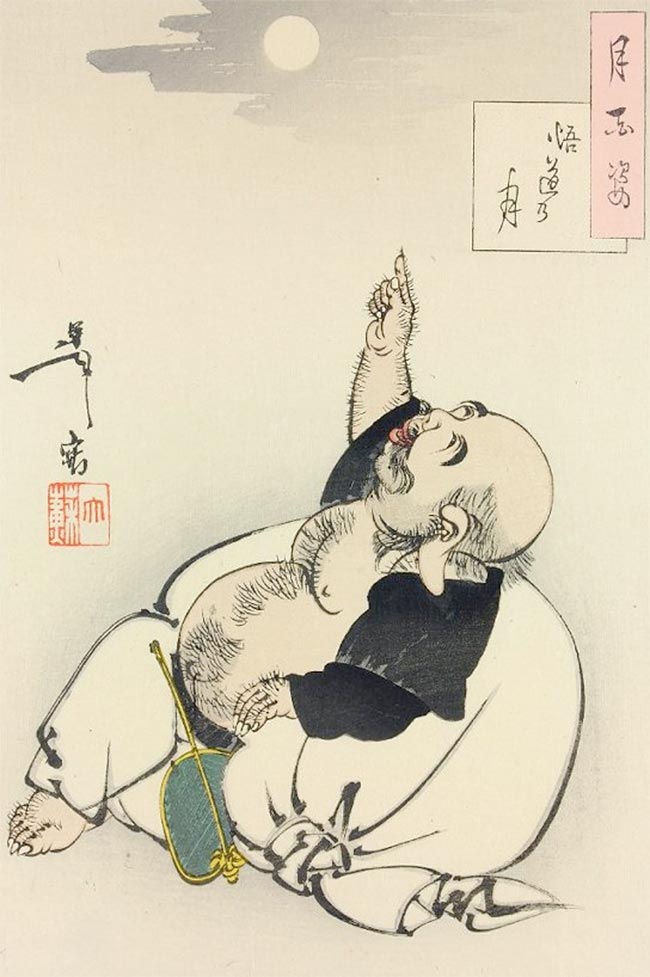 Bodhidharma left his robe and bowl to his chosen successor; and each patriarch thereafter handed it down to the monk that, in his wisdom, he had chosen as the next successor. Gunin was the fifth such Zen patriarch. One day he announced that his successor would be he who wrote the best verse expressing the truth of their sect. The learned chief monk of Gunin’s monastery thereupon took brush and ink, and wrote in elegant characters:

The body is a Bodhi-tree
The soul a shining mirror:
Polish it with study
Or dust will dull the image.

No other monk dared compete with the chief monk. But at twilight Yeno*, a lowly disciple who had been working in the kitchen, passed through the hall where the poem was hanging. Having read it, he picked up a brush that was lying nearby, and below the other poem he wrote in his crude hand:

Bodhi is not a tree;
There is no shining mirror.
Since All begins with Nothing
Where can dust collect?

Later that night Gunin, the fifth patriarch, called Yeno to his room. “I have read your poem,” said he, “and have chosen you as my successor. Here: take my robe and my bowl. But our chief monk and the others will be jealous of you and may do you harm. Therefore I want you to leave the monastery tonight, while the others are asleep.”

In the morning the chief monk learned the news, and immediately rushed out, following the path Yeno had taken. At midday he overtook him, and without a word tried to pull the robe and bowl out of Yeno’s hands.

Yeno put down the robe and the bowl on a rock by the path. “These are only things which are symbols,” he said to the monk. “If you want the things so much, please take them.”

The monk eagerly reached down and seized the objects. But he could not budge them. They had become heavy as a mountain.

“Forgive me,” he said at last, “I really want the teaching, not the things. Will you teach me?”

*Yeno (Hui-neng, 638-713), traditionally considered the Sixth Patriarch of the Zen sect in China