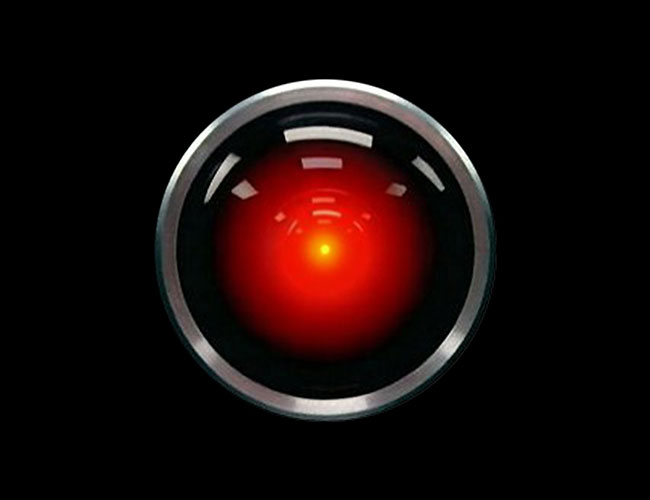 The HAL 9000 computer is one of the stars of Stanley Kubrick’s science-fiction film masterpiece, 2001: A Space Odyssey, and the novel it is based on by Arthur C. Clarke. It has often been a legend that the name HAL was derived because each letter comes one place before IBM in the alphabet. Arthur C. Clarke has always denied this, and the true origin of HAL’s name is recounted on the HAL 9000 Wikipedia page:

Although it is often conjectured that the name HAL was based on a one-letter shift from the name IBM, this has been denied by both Clarke and 2001 director Stanley Kubrick. In 2010: Odyssey Two, Clarke speaks through the character of Dr. Chandra (he originally spoke through Dr. Floyd until Chandra was awoken), who characterized this idea as: “[u]tter nonsense! […] I thought that by now every intelligent person knew that H-A-L is derived from Heuristic ALgorithmic”.

Clarke more directly addressed this issue in his book The Lost Worlds of 2001:

As is clearly stated in the novel (Chapter 16), HAL stands for Heuristically programmed ALgorithmic computer. However, about once a week some character spots the fact that HAL is one letter ahead of IBM, and promptly assumes that Stanley and I were taking a crack at the estimable institution … As it happened, IBM had given us a good deal of help, so we were quite embarrassed by this, and would have changed the name had we spotted the coincidence.

Also, IBM is explicitly mentioned in the film 2001, as are many other real companies. IBM is given fictional credit as being the manufacturer of the Pan Am Clipper’s computer, and the IBM logo can be seen in the center of the cockpit’s instrument panel. In addition, the IBM logo is shown on the lower arm keypad on Poole’s space suit in the scene where he space walks to replace the antenna unit, and may possibly be shown reflected on Bowman’s face when he is inside the pod on his way to retrieve the body of Poole (there is speculation as to whether or not the reflection is that of the letters “IBM” or the letters “MGM”, the film studio).

HAL has become such an icon of our culture that we are fortunate neither Clarke or Kubrick noticed the downshift from “IBM,” or this epic computer may have been named “Siri.” Or Dora. Or Obie. Or any one of these other names of fictional computers.