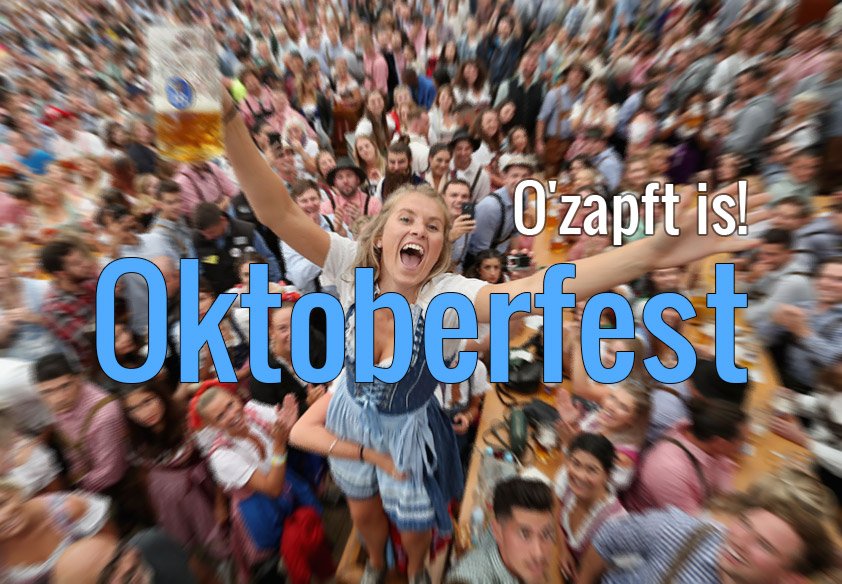 In naming, Zinzin loves the practice of getting outside of ourselves, our specialty, our industry. It keeps the creative juices brewing, because great names are all around us. They bubble up within the language of poetry, literature, art, science, nature…and beer. That’s right! Oktoberfest 2022 is upon us, and this Zinzin namer is ready to be inspired by its history, traditions, and quirks.

Alas, I’m not typing this post directly from Germany, but let’s step outside of naming for a few minutes and travel-by-brain to this 200+ year-old festival devoted to Bavarian culture and beer. It’s sure to leave us amazed, enlightened, and perhaps a little thirsty.

Oktoberfest is the annual two-week festival held every fall in Munich, Germany, the capital and largest city of Bavaria. Locals call it “Wiesn,” a nickname for Oktoberfest’s location – Theresienwiese in central Munich. This year, the festival runs from September 17 – October 3. It features attractions and family-friendly days (“Familientag” or “Kindertag”), with food, games, rides, folk music, dress, and dancing. And, of course, there’s beer. Lots of beer. What draws crowds from Germany and around the world are the 38 beer tents where Oktoberfestbier flows famously fast. (Roughly two million gallons total!)

Why is Oktoberfestbier so special?

During Oktoberfest, the only beers on tap are brewed in Munich and meet The Edict of Purity (Reinheitsgebot, literally “purity order”). Specifically, they are Märzen beer, which means they’re stronger and darker than traditional beer. Therefore, these rules help ensure that Oktoberfest remains in Munich. Actually, the name Oktoberfestbier is a registered trademark of the association of Munich breweries, comprised of six breweries.

Here’s a great overview of “The Big Six: German Beers at Oktoberfest” by Oktoberfest Haus.

1. Each beer served at Oktoberfest in Munich must go by the Reinheitsgebot, meaning each beer has a minimum of 13.5% Stammwürze (which translates to approximately 6% alcohol) and must be “pure” – containing only water, barley, hops, yeast, wheat malt and/or cane sugar.

2. All beer at the festival must be brewed within the city limits of Munich.

The “Big Six” breweries that produce Oktoberfest Beer under the criteria are:

Let’s go through them one by one:

The Brewery: The Augustiner brothers began brewing beer in 1328 which makes Augustiner one of Munich’s oldest surviving breweries. Anton and Therese Wagner purchased Augustinerbrau in 1829 and their family continues to own and operate the brewery. Augustiner is renowned by locals and visitors alike for brewing Munich’s best beer. Theories on the taste range from their religious roots to the private well the brewery draws its water from.

The Flavor: full of light bready malts, caramel, light grasses and a well rounded hop profile. This beer has an amazingly crisp and clean flavor.

The Brewery: For many years Hacker and Pschorr were separately some of Munich’s most successful breweries, but in 1972 they became what you know today as Hacker-Pschorr. Today, the brand is part of Paulaner, but retains its brewing independence.

The Flavor: This beer has a little bit of everything; meaning all aspects of the flavor profile are accounted for: the beer tastes sweet, bitter, dry, malty and hoppy all at once. The sweet, lightly toasted, lightly nutty malt is offset by floral-fruity German hops. Its versatility is what sets this beer apart and gives it a distinct personality.

The Brewery: This beer is everywhere in Munich, in part because of its 14th century roots. Supposedly it is essentially the same beer that was served almost 700 years ago. Its name means “Lion’s Brew.”

The Flavor: Crisp and light bodied to start, this beer finishes with a prickly, spicy hop bitterness. After the hops fade, only clean, refreshing sweetness remains.

The Brewery: In the early 19th century master brewer Franz Xavier Zacherl put Paulaner on the map by introducing steam-power into the production process and adding large storage cellars. The brewery became a publicly owned company in 1886 and today it is the largest brewery in Bavaria.

The Flavor: A typical Munich sweet lager, Paulaner is one of the best beers at Oktoberfest. This beer blends light, toasted malt with a smidgeon of spiced banana and a lemon-hop finish, successfully cleansing the palate, and opening the door for the intake of delicious foods.

The Brewery: Spaten is associated with perhaps the most famous brewing family Munich has ever produced. Gabriel Sedlmayr and his sons Josef and Gabriel II. At the 1872 Oktoberfest, Josef introduced the first amber-colored Märzen-style beer and it became the Oktoberfest beer we know today. Gabriel II introduced a revolutionary cooling process that opened the door for the bottom-fermentation method used for Munich lagers. After World War I, the two brothers combined their brewing houses to a single Spaten brand. Since then, Spaten has gone through a few mergers and buyouts, but the taste of the brew is unchanged.

The Flavor: Crisp and bubbly, this beer demonstrates a mild biscuity malt before the graininess hits with a faintly lemon note, before a hop-filled finish. Lingering, long after the beer is finished, is a grainy and hoppy dryness that leaves you wanting more.

The Brewery: Augustiner has its religious roots and Hacker-Pschorr its commercial beginnings, but Hofbräu has a royal connection – notice the crown on every bottle or mug – Duke Wilhelm V founded the Hofbräuhaus and brewery in 1589. HB, as it is commonly known, brewed the world’s first “bock” in 1614 and the rest was history.

The Flavor: Starting crisp and refreshing, this beer really grows up when you taste the grain, hay, dough, and bitter noble hops that follow, but through all that it never loses its crisp fresh beginnings. 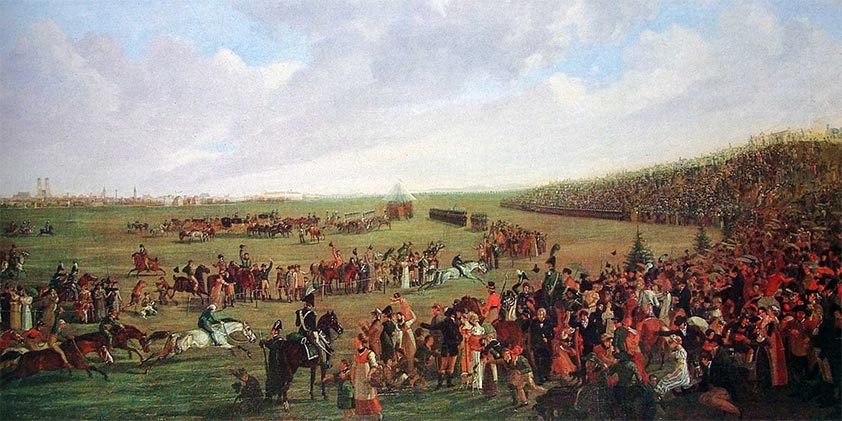 A quick history of how Oktoberfest began

It all started with a royal wedding and one hell of an after-party.

Prince Louis (Ludwig I) and Princess Therese von Sachen-Hildburghausen married on October 12, 1810. After the wedding, they had a multi-day celebration and invited all citizens of Munich, no matter their social standing.  The highlight: a horserace in an open field, soon thereafter named Theresienwiese, or “Therese’s green,” which is where Oktoberfest is held to this day. (Hence, in Munich you literally say, “I’m going out to the meadow” (naus auf d’Wiesn), when you visit the Oktoberfest.)

Basically, locals had SO much fun at this celebration that they repeated it the following year — a festival complete with food and drinks. Then, they had it the year after. And nearly every year since for over 200 years.

In fact, throughout its long history, Oktoberfest was cancelled only 13 times — the main culprits being war and disease. If you’d like to know more about the specific years and reasons why Bavarians paused Oktoberfest, check out this entertaining blog post by Ashley Smith called, “Has Oktoberfest ever been cancelled?”

According to the official website of the Weisn, there’s no Oktoberfest without the tapping ceremony. Here, they explain what this tradition is and how it began:

Every year, the tapping ceremony in the Schottenhamel festival hall kicks off the Oktoberfest. As tradition has it, at 12 noon on the first Saturday of the Oktoberfest, the mayor taps the first beer barrel and opens the Oktoberfest with the Bavarian exclamation “O’zapft is!” (“It’s tapped”).

In as few blows as possible: the perfect tapping ceremony

According to long-standing tradition, the first beer barrel at the Wiesn is always tapped at the Schottenhamel festival tent. The mayor of Munich tries his hardest to insert the tap in as few blows as possible to fill up the first beer glass, which is customarily handed to the incumbent Bavarian state premier. The current record for the perfect tapping ceremony lies at two blows – the record is shared by former Munich mayors, Christian Ude and Dieter Reiter. Mayor Thomas Wimmer (SPD), who introduced the traditional tapping ceremony in 1950, needed 17 blows!

Why is the tapping ceremony taking place at the Schottenhamel?

“O’zapft is!”, comes the cry from the Schottenhamel festival hall, because it’s where the event was “officially” tapped for the first time in 1950 by Thomas Wimmer, the mayor at the time. It’s said that he hurried to the Schottenhamel for the Oktoberfest opening ceremony because he was running a little late after opening a fair at Theresienhöhe just before 12. What’s more, it was pouring with rain on this Saturday afternoon in September 1950, causing Mayor Wimmer to take the fastest route into a tent. Whether it really happened that way or it’s just a Wiesn legend is hard to say.

12 gunshots signal the start of the festival

After the successful tapping ceremony, twelve gunshots are fired in front of the Bavaria to signal to the other festival tents at the Wiesn: Oktoberfest is officially open and the beer can start flowing! Although the Wiesn tents open at 9 am on the first Saturday, beer can only be served in all the tents after the shots have been fired.

Just for fun: Oktoberfest by the numbers

Here’s a list of eyebrow-raising Oktoberfest facts culled from a 2019 Insider article:

In celebration of this season’s Bavarian spirit and sense of cordiality, or gemütlichkeit, I wish you the chance to step away from your desk, calendars, and Zoom meetings. Head outside for a fun, inspiring experience (beer or no beer). No matter what industry you work in, it’s always a good refresh to step outside of yourself and gain a new perspective.