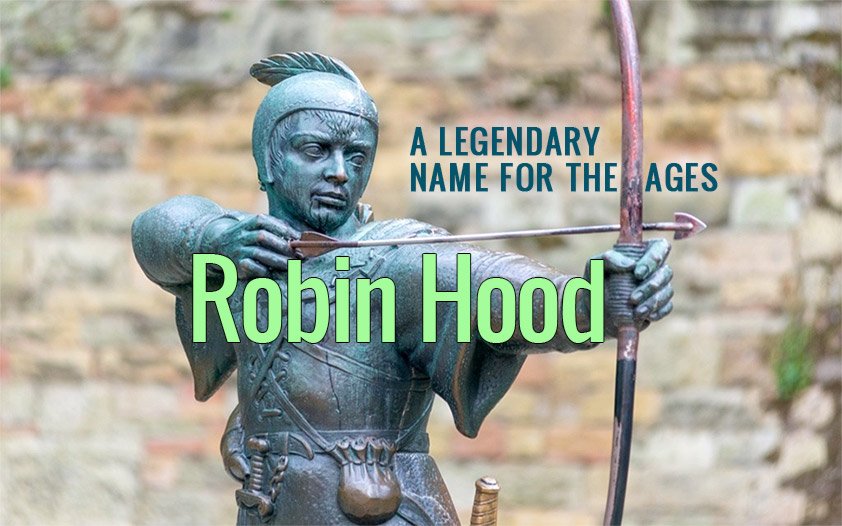 ‘Tis the season of giving, so we turn our naming spotlight on the one, the only, the legend: Robin Hood. This name is immediately synonymous with a heroic outlaw who steals from the rich and gives to the poor. Aside from his affinity for Lincoln green tights, what Zinzin finds most extraordinary is how this character from ancient English folklore has endured in company and product naming well into modern times.

First, a little about Robin Hood, the legend

Actually, it’s tough to write only a little about Robin Hood. History shows that his legend, along with variations of it in literature and ballads (and much later in TV and film) has existed since the 13th or 14th centuries. There’s even scholarly debate about his origins. For instance, was he a nobleman or a yeoman? Was he a thieving outlaw or an affable hero? Was he really so good with a bow and arrow?

Despite the debate over details, Robin Hood has always been a popular guy, a man of the people. He resisted authority, championed “commoners,” and fought for justice in his own rebellious way with his own rogue band of buddies. And love it or hate it — his fashion choice is a bold and lasting one. Robin Hood is our green-clad, rebel-hero for the ages. And the proof lies in the myriad modern-day brands bearing his name.

The most recent Robinhood brand name to emerge is a true fintech disruptor. Its mission is “to democratize finance for all.” In a rogue, everyman-hero way like its namesake, Robinhood introduced commission-free stock trading (with no minimum balances) in a simple app that attracted a new generation of young investors. Robinhood wanted to level the playing field and make trading easily available to everyone, not just the wealthy (and not just through decades-old, big brokerage firms).

According to the company, here’s how Robinhood started:

Our story began at Stanford, where co-founders Baiju and Vlad were roommates and classmates. After graduating, they packed their bags for New York City and built two finance companies, selling their own trading software to hedge funds. There, they discovered that big Wall Street firms were paying next-to-nothing to trade stocks, while most Americans were charged commission for every single trade. They wanted to change that, so they headed back to California to build a financial product that would give everyone—not just the wealthy—access to financial markets.

Today, over 15 million people use Robinhood as their primary trading platform. This Robinhood, named by its co-founders, is becoming a modern-day legend in its own right.

We can’t think of a better name for “New York City’s largest poverty-fighting organization.” In 1998, Robin Hood was founded by billionaire hedge fund manager, Paul Tudor Jones. The (oversimplified) story goes — he gathered his other billionaire friends and made an appeal. He wanted to find a new and better way to fight poverty in New York City. His idea was to use more of a Wall Street business model, using specific metrics and, ultimately, accountability, to ensure the effectiveness of Robin Hood’s mission.

We support low-income families by building and fueling the most impactful nonprofits across all five boroughs that are elevating people from poverty. Over three decades, we’ve invested more than $3B in New York City to ensure low-income families are on pathways needed to realize economic mobility.

Back in 2013, 60 Minutes aired an interview with Paul Tudor Jones called “Modern-Day Robin Hood.” To our namer-delight, he had this to say about the power of having a great brand name:

If you said to me what part of our success is due to our name, I’d say it’s a big part of it ’cause it’s a great name, right? It says everything.

Zinzin agrees! It does indeed “say everything,” but not in the usual, descriptive way. Instead, the name tells a great story, tapping into the Robin Hood mythos of “robbing from the rich to give to the poor,” updated for the 21st century. The way Robin Hood pulls off this feat is very smart, and well-told in the 60 Minutes piece.

We think it’s also refreshing to hear a successful business leader, let alone a billionaire, acknowledge that success in business is not merely the result of a great product, vision, or  founder’s genius. That having the right name can make all the difference in the world between achieving average results or phenomenal success.

Lastly, this consumer product brand named after our favorite outlaw-in-tights has existed for over 100 years. Robin Hood Flour, now owned by the J.M. Smucker Co., is still manufactured in Canada where it all started. According to the company’s history:

From its modest beginnings in Moose Jaw in 1909, Robin Hood has established itself as a household name through hard work, foresight and innovation. Its green-and-red archer emblem has become a familiar and highly regarded symbol of quality and good value from coast to coast…

…Robin Hood has come a long way since the days of selling flour in wooden barrels. A lot has changed, but our philosophy has remained the same: we’re sensitive to changing needs and lifestyles, so that we can help you bake better.

The origins of this flour brand are lost to history, but it seems the legend of Robin Hood’s desire to help everyday people is consistent with the brand positioning here.

Robin Hood has become a powerful, evocative brand name for companies that embrace their rebellious, for-the-people brand positioning. These companies are not afraid to stand out in this noisy world and competitive marketplace. The name Robin Hood also goes to show that naming inspiration often comes from literature and the arts, which we love!

What other modern brand name can be traced back to the 13th century? This is us musing and genuinely asking…if you know of one, feel free to include it in the comment section below.