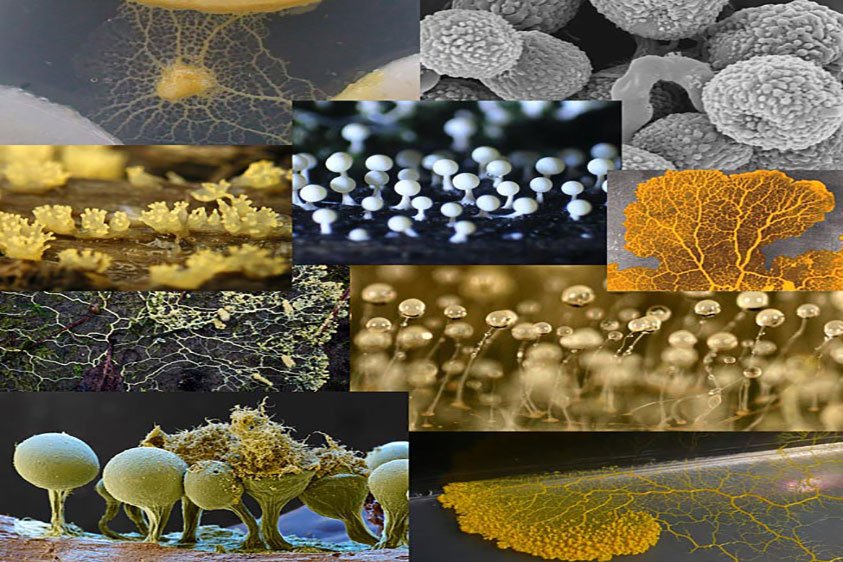 Every once in a while, Zinzin comes across a name that turns our heads. Usually, it’s because the name sounds, looks, or otherwise seems unusual or interesting — like marine algae Heterosigma Akashiwo, paint color Dead Salmon, or eyewear brand Warby Parker. This time it’s the slime mold Physarum Polycephalum, otherwise known as The Blob.

We love to get outside of ourselves, and our industry, so this named slime mold, complete with enchanting nickname, inspired us to dive into this slimy worm hole of a topic. The Blob happens to be one of over 900 brainless primordial organisms that continue to fascinate scientists — and the rest of us — around the world, especially within the past decade. What they’ve found in The Blob is a remarkable type of “brainless intelligence” — the ability to remember, make decisions, and solve mazes.

The Wisdom of Slime

A 2012 article in The New York Times Sunday Review, The Wisdom of Slime, by Andrew Adamatzky and Andrew Ilachinski, first turned us on to the amazing slime mold. The authors ask, “Would America’s highway system be better if it had been designed by mold?” The article discusses some of the latest scientific research into the lowly slime-mold, a creature with no brain that nevertheless possesses a sophisticated intelligence.

An interesting fact about this slime mold is that it is highly intelligent — or at least it behaves as if it is. In locating food in its environment, it builds networks that have been shown to be optimally efficient in transporting the nutrients over the area in question. If placed in a maze, for instance, with a source of food outside the maze, the slime mold will discover the shortest path out.

The Japanese researcher Toshiyuki Nakagaki and his colleagues have demonstrated that the slime mold’s foraging behavior can be used to perform sophisticated computations, as long as the problems are represented spatially. Problems solved by the slime mold include not only the shortest path out of a maze, but also other complex mathematical challenges (like creating a Voronoi diagram and a Delaunay triangulation).

Despite its ability to solve an array of problems, the slime mold was designed by evolution to solve just one problem: how to build an optimal transport network (for its nutrients).

… What did the resulting network look like? It looked remarkably like the United States interstate highway system.

… For all of these countries, we found that the slime mold network matched, at least partly, the network of human-made transport systems, though the closeness of fit varied from country to country. The United States highway system, for instance, is less slime-mold-like than that of Canada.

That’s right, slime molds build their networks at least as intelligently as humans build interstate highway networks. And, as the images above attest, they can be quite beautiful in their slimy moldishness.

However, one major question remains, What kind of music do slime molds enjoy while traveling along their slimy Route 66s? To get an idea, let’s follow The Blob further down this pop culture worm hole.

Le Blob at the Paris Zoo

In 2019, Physarum Polycephalum was a worldwide celebrity. The Blob took center stage with an exhibit at the Paris Zoo, as this NPR article explains: ‘The Blob,’ A Smart Yet Brainless Organism Fit For Sci-Fi, Gets Its Own Exhibit:

A brainless, bright-yellow organism that can solve mazes and heal itself is making its debut at a Paris zoo this weekend.

At least so far, “the blob” is more benevolent than the ravenous star of its 1950s sci-fi film classic namesake… The slime mold, which lacks a nervous system, is capable of advanced decision-making, learning and long-term memory storage, according to Audrey Dussutour, who studies unicellular organisms with the French National Center for Scientific Research.

“It can find its way through a maze, it can construct efficient transport networks, sometimes better than us, actually,” Dussutour said in an interview with NPR’s Weekend Edition.

In one remarkable experiment published in Science, researchers in Japan found that a slime mold managed to configure itself into a near-replica of the meticulously designed Tokyo rail system when introduced with an oat-flake model of Tokyo and its surrounding metropolis.

Cut the blob into two, and it can regenerate itself within two minutes, according to the zoo.

The year 2019 continued to be a big one for this slimy celebrity, Physarum Polycephalum, which, by the way, is Latin for “many-headed slime.” Facts like this and far more mind-bending ones are revealed in a 2019 documentary film about The Blob. 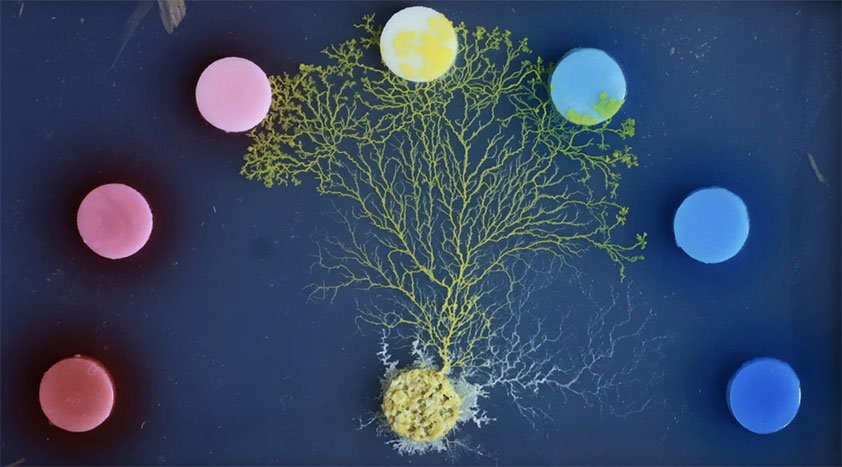 The same year as the The Blob’s Paris Zoo exhibit, French film director, Jacques Mitsch, directed and co-wrote a documentary originally titled, “Le blob, un génie sans cerveau” or “The Blob: A Genius Without a Brain.” It stars Andrew Adamatsky, Frantisek Baluska, and Audrey Dussutour — all renowned scientists, researchers, and slime mold experts. So, get your popcorn ready — you can watch the entire (50:27) documentary online at Documentary Mania. Here’s the teaser:

The Blob: A Genius without a Brain

Not an animal, nor a plant, nor fungi, the blob is one giant single cell whose amazing capacities are leading pioneer scientists to a very new world – that of brainless intelligence. More commonly known as slime mould, this extraordinary one-billion-year-old organism challenges our understanding in many different fields. This fascinating documentary follows top experts from Europe, Japan and the US on a scientific investigation into this most surprising organism.

While we’re on the subject of blobs and film, let’s connect the dots back to 1958, when the classic science fiction horror film, The Blob, originally oozed into our collective cultural consciousness and lexicon. Oh, and remember, “The Blob” wreaks havoc in these movies, but, in reality, the slime mold is not harmful to humans, animals, plants or the environment.

But first — Who coined the name, The Blob?

We have Kate Phillips (known professionally as Kay Linaker), the film’s co-writer, to thank for the iconic name. When she died in 2008, her obituary by The New York Times said, Kate Phillips, Actress Who Christened ‘The Blob,’ Is Dead at 94. The story goes:

In 1956, while working with Theodore Simonson on the script for a movie that was supposed to be called “The Molten Meteor,” Mrs. Phillips referred to the giant jellylike creature from another planet that had plopped into a field outside of a small town as “the blob.” Overhearing her, the producers changed the name of what became something of a cult classic.

This is The Blob film that started it all, starring Aneta Corsaut and Steve McQueen. It’s about an amoeba-like alien from outer space that crashes to Earth and relentlessly takes over the small American towns it encounters.

Directed by Larry Hagman, this is the second film in The Blob series. This time an engineer played by Godfrey Cambridge brings a frozen specimen of the original Blob back from the North Pole to his home in Los Angeles. His wife, played by Marlene Clark, accidentally defrosts it, then it terrorizes the community.

To capture the nostalgia of the original Blob, this is the third film in the series came out 30 years later. It has a large cast, starring Shawnee Smith and Kevin Dillon. This time the amoebic organism crashes to Earth in a military satellite and destroys anything in its path.

Other “blobs” in the world

Thanks to Wikipedia, we don’t have go far to find a thorough list of “other blobs” out there. Here are Zinzin’s 10 favorite blobs (other than the ones featured above):

Brother, can you spare a slime?

Here’s a fun fact: the record for the longest blob in the world goes to Chateauroux, France. In June 2022, over 500 students and other French “blobers” combined approximately 1,000 samples of their own Physarum Polycephalum culture, which reached 53 meters and 9 cms, or about 174 feet long. (That’s 10 feet taller than the Arc de Triomphe!) Supervised by scientist and blob expert Audrey Dussutour (see Le Blob documentary above), Zinzin is impressed with how they totally “chatereaurox’d” the record.

As it turns out, there’s a lot to say about slime molds, especially The Blob. We didn’t even scratch the surface of the science and scholarly debate surrounding slime molds. Some believe it comes down to a debate over words (or how we define things, like intelligence) over the science. If you want to know more, we leave you with this fascinating article in Quanta Magazine called, Slime Molds Remember — but Do They Learn?

We’ll leave the answer to slime-mold learning to the experts, but Zinzin learned even brainless organisms are capable of rare and amazing things. Hopefully, by studying them more, we can open up a world of discovery about the interaction, communication, and interdependence among all things here on Earth. If there’s naming in the world of nonhuman animals, why not in the world of slime molds?

Earlier, we asked, What kind of music do slime molds enjoy while traveling along their slimy Route 66s? Well, we think we found it.

The track above is “BLOBFISH,” featuring Douglas Quint on contrabasson and Paul Cohen on tubax. From Michael Hearst’s PBS special, Songs for Unusual Cratures. It’s enough to make Physarum Polycephalum rock out on its own slimy superhighways.