You could say that naming is the shortest form of writing there is. Maybe that’s why I’ve always found inspiration in the process and advice of great authors.

Way back in 2012, I read a wonderful opinion piece in The New York Times called My Life’s Sentences by the author Jhumpa Lahiri. She wrote about the art and craft of writing sentences, and the role they play in her own writing. To this day, her opinion makes me think about our own naming process and continues to inspire creativity here at Zinzin. Lahiri begins,

In college, I used to underline sentences that struck me, that made me look up from the page. They were not necessarily the same sentences the professors pointed out, which would turn up for further explication on an exam. I noted them for their clarity, their rhythm, their beauty and their enchantment. For surely it is a magical thing for a handful of words, artfully arranged, to stop time. To conjure a place, a person, a situation, in all its specificity and dimensions. To affect us and alter us, as profoundly as real people and things do.

I love this concept of enchantment, of what a magical thing it is for a mere “handful of words, artfully arranged, to stop time.” Lahiri continues with a great example of such conjuring:

I remember reading a sentence by Joyce, in the short story “Araby.” It appears toward the beginning. “The cold air stung us and we played till our bodies glowed.” I have never forgotten it. This seems to me as perfect as a sentence can be. It is measured, unguarded, direct and transcendent, all at once. It is full of movement, of imagery. It distills a precise mood. It radiates with meaning and yet its sensibility is discreet. 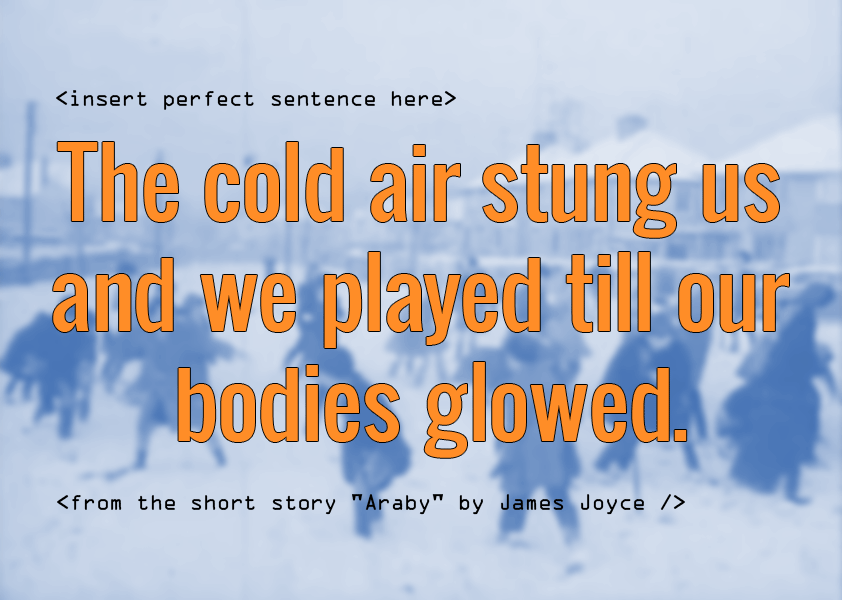 The concept of the sentence as a stopper of time and a conjurer of places, people, and situations is beautifully put. It’s what we strive for in our naming work at Zinzin — to go beyond mere identification and representation, and to evoke other worlds, imagery, movement, meaning and mood. When it works with a single name — it’s magic.

On the other hand, the poet Robert Creeley has a different take on the idea of a sentence: “Oh yes, the sentence,” Creeley once told the critic Burton Hatlen, “that’s what we call it when we put someone in jail.” One writer’s “conjurer of worlds” is another writer’s jail cell. (Check out Zinzin’s blog post featuring the poem, “The Answer,” by Robert Creely.)

From a poet’s perspective, the conjuring takes place on the lips of the speaker and in the mind of the listener/reader, independent of the structural norms of narrative prose, or any “norms” for that matter (see Kurt Schwitters, Die Sonate in Urlauten).

Sentences are the blood of prose

For the writer of narrative prose, however, the sentence is a cellular organism — blood of the writer blood of the book — bringing stories to life. I’ve referred before to Don DeLillo’s 1993 Paris Review interview, but this bears repeating here:

…the basic work is built around the sentence. This is what I mean when I call myself a writer. I construct sentences. There’s a rhythm I hear that drives me through a sentence. And the words typed on the white page have a sculptural quality. They form odd correspondences. They match up not just through meaning but through sound and look…. I’m completely willing to let language press meaning upon me. Watching the way in which words match up, keeping the balance in a sentence—these are sensuous pleasures.

Sentences are the writer’s will to live

For DeLillo, the sentence is the existential force that that wills his narratives — and thus himself as a writer — into being. Bill Gray, the reclusive novelist protagonist of DeLillo’s tenth novel “Mao II,” says at one point: “I’m a sentence maker. Like a donut maker, only slower.” Elsewhere, Gray — speaking from a gray zone between character and author — illuminates what appears to be DeLillo’s core concept of the sentence:

Every sentence has a truth waiting at the end of it and the writer learns how to know it when he finally gets there. On one level this truth is the swing of the sentence, the beat and poise, but down deeper it’s the integrity of the writer as he matches with the language. I’ve always seen myself in sentences. I begin to recognize myself, word by word, as I work through a sentence. The language of my books has shaped me as a man. There’s a moral force in a sentence when it comes out right. It speaks the writer’s will to live.

The language of my books has shaped me as a man. For DeLillo, there is no “I: The Writer” who writes sentences. It is only through writing that the writer is born. The sentence begets the writer. To live, the writer must write the right sentences. This, in turn, creates the writer, until they become interchangeable.

Sentences must shock and illuminate

Sentences enter the blood, for they are the red blood cells of prose. The author and her works have become one. Lahari goes on to explain the special something that great sentences must possess, if they are to ignite the reader’s imagination:

As a book or story nears completion, I grow acutely, obsessively conscious of each sentence in the text. They enter into the blood. They seem to replace it, for a while…

The most compelling narrative, expressed in sentences with which I have no chemical reaction, or an adverse one, leaves me cold. In fiction, plenty do the job of conveying information, rousing suspense, painting characters, enabling them to speak. But only certain sentences breathe and shift about, like live matter in soil. The first sentence of a book is a handshake, perhaps an embrace. Style and personality are irrelevant. They can be formal or casual. They can be tall or short or fat or thin. They can obey the rules or break them. But they need to contain a charge. A live current, which shocks and illuminates.

Replacing Lahari’s “they” with “names,” and we get to the core of great naming: [Names] can be formal or casual. They can be tall or short or fat or thin. They can obey the rules or break them. But they need to contain a charge. A live current, which shocks and illuminates.

To paraphrase Don DeLillo: Every [name] has a truth waiting at the end of it and the [namer] learns how to know it when he finally gets there. For sentences, poetic fragments and names alike, there is a unique, individual truth waiting to be uncovered. And uncovering it is the journey.