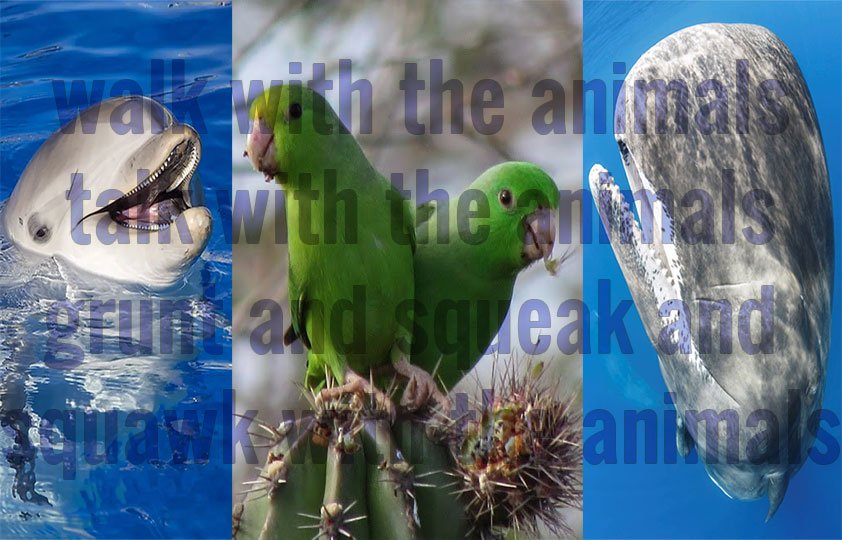 What do humans, bottlenose dolphins, sperm whales, and green-rumped parrotlets have in common? Any guesses? Need to phone a friend? Give up? Ok, I’ll tell you: it’s learned language, even naming! In this sense, I’m talking about the ability to create a signature call, like a name, and communicate with it. (But if you ever hire a green-rumped parrotlet to name your company or product, let us know how it goes.)

While Zinzin knows just how important names are to human animal identity and culture, we’re fascinated by the way they impact nonhuman animals as well. Why? Well, I guess the short answer is that we namers at Zinzin are a curious bunch and love language. We revel in the fact that language is alive on the move: it’s a living, breathing organism, always changing, morphing, evolving. By understanding how other species create and use names in their worlds, perhaps we’ll learn more about ours too.

Before we get to the language of nonhumans, let’s start with an overview of human language as a basis for comparison. Here are Zinzin’s brief thoughts on how naming started, as found in the second tenet of our Naming & Branding Manifesto:

Communication began with grunts and squeals, crude vocalizations, painted images and a lot of hand waving. From this, names evolved to identify the bison to be hunted or the ideal cave for shelter and ceremony. Names are the beginning of language, and from language sprang culture and civilization. But it all began with a name, and it’s a good bet that the first name was probably “I”. I am hungry. I want you. I need a new name for my cave painting business. The first “iBrand.”

Like humans, dolphins create a personal identity, similar to names, using signature whistles. In a May 2022 article on NBC news, science writer Sarah Sloat explores, “How do dolphins name themselves? A study on signature whistles offers clues.” Her article begins with “bleats, chirps and squeaks,” which is much like Zinzin’s descriptions of early human’s grunts, squeals and crude vocalizations:

Young dolphins, within the first few months of life, display their creativity by creating a unique sound. These bleats, chirps and squeaks amount to a novel possession in the animal kingdom — a label that conveys an identity, comparable to a human name.

These labels are called signature whistles, and they play an essential role in creating and keeping relationships among dolphins. While the development of a signature whistle is influenced by learning from other dolphins, each whistle still varies in volume, frequency, pitch and length.

Scientists have studied signature whistles for over 50 years and have made significant gains in understanding how whistles are used and why. But what is less understood are the exact factors that influence these varying styles used to broadcast a singular creature’s existence.

A study published Thursday on dolphins in the Mediterranean Sea now claims that two influences best explain the differences among signature whistles: the local ocean environment and the demographics of different dolphin populations.

However, unlike humans, dolphins lack complexity in their cognitive thought. They use their signature whistles to maintain relationships, but that’s about all, as far as scientists know. But is that a bad thing? Dolphin expert, Justin Gregg, PH.D, says no. He argues that they may even be onto something in his recently published book, “If Nietzsche Were a Narwhal: What Animal Intelligence Reveals About Human Stupidity.” (Currently in this namer’s book queue.) In fact, The New York Times reviewed this book, and here’s what they said,

Humans Know A Lot, This Author Concedes, And Most of It Is Useless.

“If Nietzsche Were a Narwhal” is mostly fixated on the ill, or the way that humans insist they are improving things when they are ultimately mucking them up. There is already a stuffed shelf of books about how we aren’t as smart as we like to think we are, or how our smartness can lead us astray: David Robson’s “The Intelligence Trap,” Leonard Mlodinow’s “Emotional,” books in behavioral economics by Daniel Kahneman or Dan Ariely. But Gregg makes a bigger case about how human intelligence has deformed the planet as well. He explicitly ventures into the conflict between optimists like Steven Pinker and pessimists like the British philosopher John Gray.

Complex thought often turns out to be a long-term liability, Gregg says. The big brains that have allowed us to proliferate as a species, domesticating the natural world, have also empowered us to wreak so much ecological havoc that we’ve unwittingly created the conditions for our own extinction. Fossil fuels have generated prosperity while hastening an apocalypse. Human ingenuity has been used to discover penicillin and to commit atrocities. Surveying the chickens in his yard, Gregg correctly predicts that they’re highly unlikely to “unite en masse to rain death down upon the world in pursuit of glory for the Great Chicken Nation.” Humans, though, are another matter. “Narwhals,” he points out, “do not build gas chambers.”

Whales & a system of clicks

Dolphins aren’t the only ones getting all the nonhuman animal language love. Sperm whale communication, or clicks, is a long-studied subject, and scientists want to learn more. A 2021 article called, “Are We on the Verge of Chatting with Whales?” in Hakai Magazine talks about a recent landmark study:

“I don’t know much about whales. I have never seen a whale in my life,” says Michael Bronstein. The Israeli computer scientist, teaching at Imperial College London, England, might not seem the ideal candidate for a project involving the communication of sperm whales. But his skills as an expert in machine learning could be key to an ambitious endeavor that officially started in March 2020: an interdisciplinary group of scientists wants to use artificial intelligence (AI) to decode the language of these marine mammals. If Project CETI (for Cetacean Translation Initiative) succeeds, it would be the first time that we actually understand what animals are chatting about—and maybe we could even have a conversation with them…

The clicks of sperm whales are ideal candidates for attempting to decode their meanings—not just because, unlike continuous sounds that other whale species produce, they are easy to translate into ones and zeros. The animals dive down into the deepest ocean depths and communicate over great distances, so they cannot use body language and facial expressions, which are important means of communication for other animals. “It is realistic to assume that whale communication is primarily acoustic,” says Bronstein. Sperm whales have the largest brains in the animal kingdom, six times the size of ours. When two of these animals chatter with each other for an extended period of time, shouldn’t we wonder whether they have something to say to each other? Do they give each other tips on the best fishing grounds? Do whale moms exchange stories about raising their offspring, like their human counterparts? It’s worth trying to find out, say the CETI researchers.

Lastly, what about nonhuman animals who dwell above ground? Certain types of birds (namely 350+ species of parrots) also use signature calls, similar to dolphins, to identity themselves to maintain relationships. One type is the green-rumped parrotlet (Forpus passerinus) found in Venezuela. Here’s an excerpt from an fascinating article by science writer Jane C. Hu called, “These Animals Use Personal Names, But Never Gossip.”

“Parrots provide a number of contact calls, and those of the youngsters’ tend to be modified versions of calls their parents make,” says Jack W. Bradbury, professor emeritus at Cornell University. The main determinant of their vocal repertoire appears to be upbringing: Fostered parrotlets will adopt calls like their adopted parents’ rather than their genetic ones. “Birds are as close as you get to tabula rasa in nature,” says Bradbury. They’re born with nearly blank slates and adapt quickly to their environment; the signature calls they develop are a reflection of that flexible identity…

Sometimes these signature handles change, and that can reflect changes in relationships. For parrotlets, morphing calls are a form of social negotiation, says Bradbury. He and his team discovered that, at first meeting, the birds exchange their signature calls several times. As their relationship unfolds, the similarity of their signals oscillates depending on whether their respective social groups will fuse and, in the event of a fusion, the group’s pecking order.

Zinzin believes naming is a science and an art. It’s a practice and a process inextricably linked to language, which is fascinating in human and animal realms. While we base our company and product names in human language, perhaps one day we’ll be inspired by what we learn from the languages of other species.

Can we talk to the animals? Do we want to? What would they say? They might tell us to get lost. Or we might have a good chat about names and naming. Maybe Zinzin could hire a green-rumped, feathered consultant. Until then, I leave you with immortal lyrics sung by Rex Harrison and Sammy Davis, Jr, also more recently embodied by Eddie Murphy and Robert Downey Jr.: