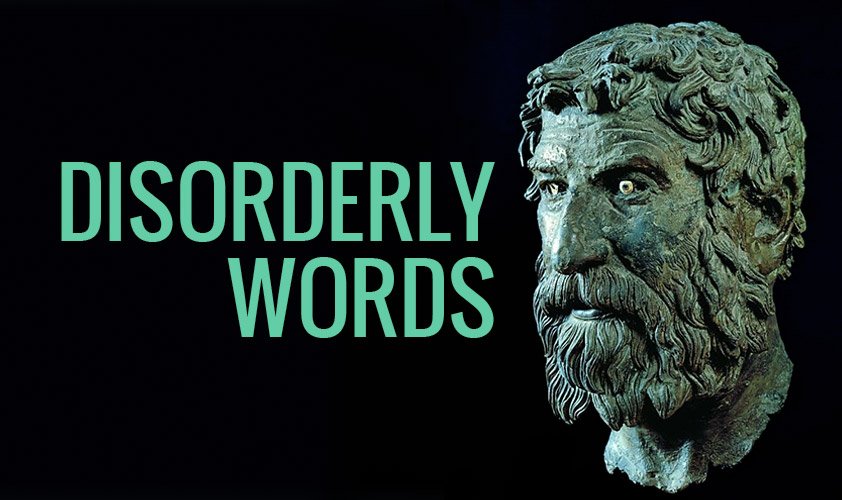 If writers love sentences, then namers love words. We study and play with them. Laugh and sneer at them. Sometimes we break them apart, and other times we invent new ones.

We delight in the challenge of distilling a message or emotion into one or two words that truly evoke a brand position. So, it’s only natural we love the original lover of words: Philitas of Cos, or simply, Philitas.

Who was Philitas of Cos?

Philitas was an ancient Greek scholar and poet. He might actually be the first Greek writer to hold such a title — poet and scholar — as far as history knows. As if that’s not cool enough, here’s the kicker — Philitas was a grammarian too, famous for his pioneering study (also fatal obsession) with words. Rare ones, at that.

Why is Philitas famous (among word nerds, anyway)?

His most notable work is called Disorderly Words (Ἄτακτοι γλῶσσαι, Átaktoi glôssai), a fantastic title in our opinion. It’s believed to have been a type of dictionary. According to Wikipedia, “it described the meanings of rare literary words, including those used by Homer. Philitas’ poetry, notably his elegiac poem Demeter, was highly respected by later ancient poets. However, almost all his work has since been lost.” But a few fragments remain.

One example, quoted in Athenaeus, is that the word πέλλα (pélla) meant “wine cup” in the ancient Greek region of Boeotia; this was evidently contrasted to the same word meaning “milk pail” in Homer’s Iliad. Hermeneia, another scholarly work, probably contained Philitas’ versions and critical interpretations of Homer and other authors.

What else do we know about Philitas?

As it turns out, historians don’t know much about Philitas’ life, other than the fact that he was a Coan, a native or long-time inhabitant of Cos, one of the Dodecanese islands in the Aegean Sea. Interestingly, historians know more about his death. Wikipedia notes:

Philitas was thin and frail, and may have suffered and died from a wasting disease. He seems to have died in Cos sometime in the 280s BC. His pupil Hermesianax wrote that a statue of him was erected under a plane tree by the people of Cos, depicting him as “frail with all the glosses.”

We can’t help but wonder — Was that an anceint Greek pun on “glossary,” which Philitas had created in Disorderly Words? Oh behave, Hermesianax, you rogue. The Philitas Wikipedia page continues:

A 2nd century AD Greek author, Athenaeus of Naucratis, wrote that Philitas studied false arguments and erroneous word-usage so intensely that he wasted away and starved to death. St. George Stock analyzed the story as saying Philitas studied the Megarian school of philosophy, which cultivated and studied paradoxes such as the liar paradox: if someone says “I am lying”, is what he says true or false? Stock wrote that Philitas worried so much over the liar paradox that he died of insomnia, and translated the epitaph as follows:

Philetas of Cos am I,
‘Twas the Liar who made me die,
And the bad nights caused thereby.

A more literal translation suggests that the invented epitaph pokes fun at Philitas’ focus on using the right words:

Stranger, I am Philitas. The lying word and nights’ evening cares destroyed me.

Coan you believe it?

You could say that Philitas of Cos, this Coan lover of paradox, had become his own koan — “a paradoxical anecdote or a riddle that has no solution. It’s used in Zen Buddhism to show the inadequacy of logical reasoning,” says OneLook. Whatever the questionable value of that pun (and I might as well throw the Coen brothers into the mix, for extra extra punishment), we have added a small morsel of information to our paltry knowledge of St. George Stock, who we’ve written about before — Who was St. George William Joseph Stock? — and who we’re still looking for among the shadows of history.

To be thorough, let’s give a quick nod to two of the more banal word cousins, cone and kone. We’re all familiar with cone from Ancient Greek kônos, “cone, spinning top, pine cone.” It’s also defined as the shape with a flat, round or oval base and a top that becomes narrower until it forms a point. But kone shapes up differently:

Who knows what the uber serious, scholarly Philitas would’ve thought about Urban Dictionary, but it’s top-ranking definition of kone is, “Someone that is positive and always striving to be the best. Also timid but cocky at times. Can also be used to explain something spectacular.” How truly kone. (But please don’t be seduced by this rare positive example. When evaluating names, avoid Urban Dictionary like the plague.)

One last little anecdote about Philitas

Wikipedia says: “The 3rd century AD Roman author Aelian skeptically passed along a story that Philitas was so thin that he put lead weights in the soles of his shoes to avoid being blown away by a stiff wind.” Probably just a little Roman humor at the expense of a Greek, but it does make for a great image.

Philitas, you are the original word nerd. We get you, buddy (maybe not the obsessive, starve to death part), but nonetheless…namers like us also have a deep devotion (sometimes bordering on obsession?) to words and all aspects of them. It’s what makes us good at what we do and happy to do it. We continue draw inspiration from great authors, scholars, and poets like you. Without you, we might suffer from lugubrious lexicographical languidity. And mark our words: no namer wants that.