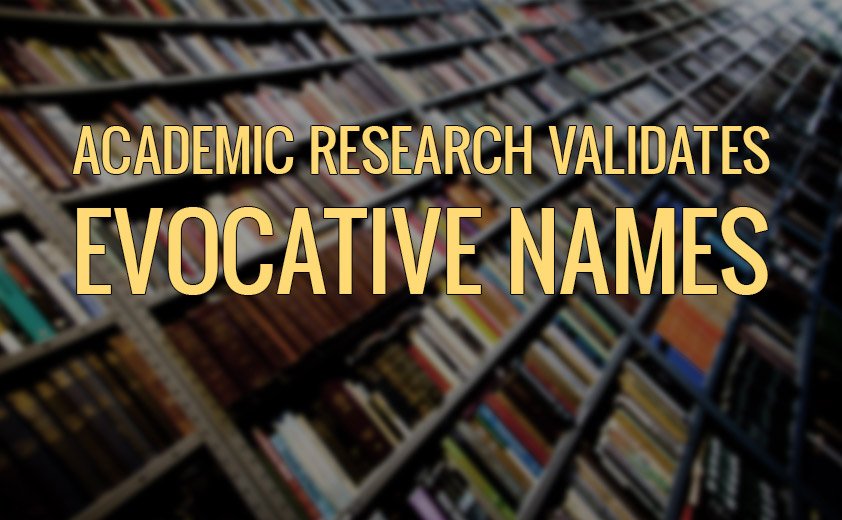 In 2005 an interesting research paper, Shades of Meaning: The Effect of Color and Flavor Names on Consumer Choice (PDF), was published in the Journal of Consumer Research. The paper, by Barbara E. Kahn, a marketing professor at the University of Pennsylvania Wharton School of Business, and Elizabeth G. Miller, a marketing professor at Boston College, presents persuasive evidence that “consumers” (why we don’t like that word) react positively to evocative names that are not descriptive.

This was news to the researchers, perhaps, but not news to us.

There is a good article about the study published on the Wharton website, Florida Red or Moody Blue: Study Looks at Appeal of Off-beat Product Names, which I will summarize below.

The emotional power of language

Barbara Kahn says, “The research may have strong implications for Internet marketers whose customers cannot see a product first-hand and tend to rely more on written descriptions when making purchases.” What she means by this is that there is no physical context to products in the virtual world. Without a physical existence, the emotional associations created by language have even more importance.

In studies of jellybeans and colored sweaters, the researchers found an overall positive reaction to names that gave little information about what a flavor or product color was really like, such as Millennium orange or Snuggly white. “People jumped to the conclusion that the marketer must be telling this information for some reason,” says Kahn. “They said, ‘Even though I don’t understand the reason, it has to be something good because marketers wouldn’t tell me something that isn’t good.’ When they stopped and spent time on the name the assumption was that it was positive.”

The joy of surprise

Kahn and Miller focus on the idea that people may attach “positive associations” to evocative words like “millennium” and “snuggly.” But we think what’s really going on here is more interesting. That, in the context of jelly beans, those words are new, unusual, and unexpected, and thus spark an emotional connection. For a tech company, “Millennium Group” would be an expected name, and thus easily forgotten. The same is true with the name “Snuggly Wash” for a detergent. For jelly beans, however, these names resonate. Not because people feel that marketers “must be telling this information for some reason,” but simply because they are different. And the human mind craves difference.

Kahn was drawn to a study of unusual product names when she began to notice nail polish being sold under color names — such as Gunpowder — that gave no information about what the polish would actually look like. Another example: the line of Gatorade Frost flavors that are sold with hard-to-imagine flavor names such as Glacier Freeze, Riptide Rush and Cascade Crash. Perhaps the ultimate in ambiguity, says Kahn, has been achieved by Crayola which uses names such as Razzmatazz and Tropical Rain Forest to describe crayons, which are nothing else if not a color. “With the nail polish there was something edgy or revolutionary,” she says. “When Crayola comes out with names that don’t describe the color of crayons, that is just astonishing.”

It shouldn’t be that surprising. Colors are the ultimate “virtual” product, where individual units of the physical product being sold — crayons, markers, paint — are all exactly alike, with the only variation being the color. In such cases the name of the color becomes vital in distinguishing that product from a competitor’s product with the same or similar color. [See our later post, Paint the salmon misty: colorful names done right, all about the explosion of very creative, evocative color names in the house paint market.]

Queue up the evocative jelly beans

Here’s how the researchers conducted their experiment:

In an initial experiment testing flavor names, 100 undergraduates were asked to complete an unrelated questionnaire on a computer. After finishing the questionnaire at the computer, the students were told they could take some jellybeans. The jellybeans were in six cups each with a sign attached listing the flavor. Half the subjects saw jellybean names that were common descriptives: blueberry blue, cherry red, chocolate brown, marshmallow white, tangerine orange and watermelon green. The other half saw flavors with ambiguous names: Moody blue, Florida red, Mississippi brown, white Ireland, Passion orange and Monster green. Researchers observed that the less common names were more popular.

As part of the experiment, some subjects were distracted by questions about the computer survey as they selected their jellybeans. In those cases, there was no preference for the unusually named flavors. That suggested that the decision to go with the less common name is a cognitive response indicating a person puts at least some thought into the decision.

Aha! Here is the key: the decision to go with the less common name is a cognitive response indicating a person puts at least some thought into the decision. In other words, unexpected evocative, metaphorical names require a person to put some thought into “decoding” them. The result is that a strong new memory is formed. This is why evocative names are so much more memorable than descriptive names. Why “Amazon” is memorable and “Book World” is not.

This is called “incongruency theory,” and was also tested specifically by the researchers as part of this study. Incongruency theory posits that, “people make judgments by evaluating new encounters against existing expectations. When encounters are incongruent with prior expectations, individuals put in more effort to resolve the incongruency.” Again, we respond with a resounding Yes! The power of unexpected names is a result of the effort required to “resolve the incongruency.” This effort cements a name in memory.

…if the name is uninformative because it is atypical, consumers will search for the reason the particular adjective was selected as described by incongruency theory. The result of this additional elaboration is increased satisfaction with the product.” Kahn says some consumers seem to enjoy figuring out the names and feel smart when an obscure, but clever name clicks in their mind.

As the researchers note in their paper, “When consumers encounter an unfamiliar name which is counter to their expectation that the marketer would be providing a familiar name, they try to determine how the adjective describes the color/flavor. If they discover the connection, the consumer may congratulate himself for solving the problem, resulting in positive affect. The most positive affect should result when the name is mildly incongruent.”

Although she did not test for it, Kahn says there is probably a point where strong incongruency would backfire, leaving consumers frustrated with meaningless names and leading to negative product response.

Yes, there is such a point, and that point is when a name, no matter how potentially interesting and powerful in and of itself, is too far removed from the brand positioning of the product, company or service. To be effective, names have to map to and reinforce the brand positioning. If names “go rogue” and fail to do that, they are then just perceived as random. People, ultimately, enjoy and identify with stories, and mapping to a well-defined brand positioning is how to Tell A Good Story with a name.

Where the academics come up short

This is a fascinating research study that we believe validates what we have observed anecdotally and have put into practice for years. The researchers, however, come up a little short in their conclusion:

Kahn says the use of odd names seems to work best in products that rely on the senses, such as food or fashion, and would probably not work in a high-stakes product category such as healthcare or financial services. And at some point, she says, the advantage of an odd or unexpected name will wear off. “Over time, people get used to it. I don’t think people have this reaction to Gatorade Frost anymore,” she says. “It isn’t an effect that’s going to last forever unless the company keeps coming up with new names.”

We beg to differ. Just look at the success we’ve had creating memorable, lasting brand names in the three sectors Kahn mentions: Healthcare/Medical/Pharma Names and B2B/Enterprise/Industrial Names, and financial names. The strongest, most powerful names work over time not by conforming to a temporary trick of perception, but by tapping into the collective memory and imagination. Doing so creates an emotional bond with individual people. A bond that remains long after the Millennium orange or Snuggly white has been used up.