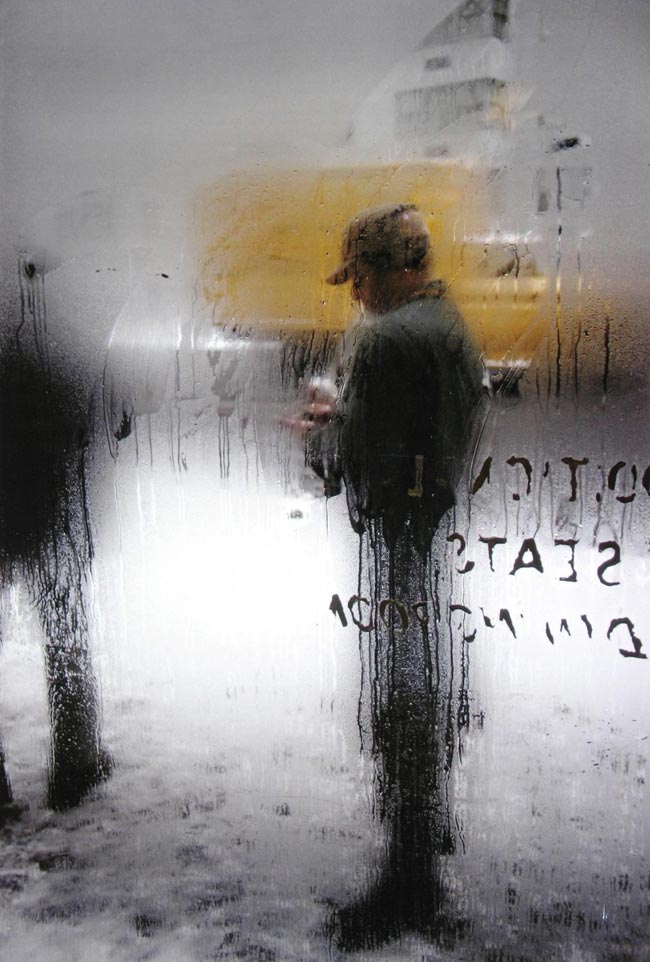 Mr. Leiter’s color is sometimes dramatic but is frequently browned-out and muted, an effect he achieved by using film — typically 35-millimeter Kodachrome — that was past its sell-by date. He often shot reflections in plate glass, which let him, without darkroom trickery, produce multiply layered images in a single exposure.

To look at one of Mr. Leiter’s photographs, critics agree, is to see something warm, intimate, fragile, very beautiful and intensely personal.

… “He broke all the rules when it came to composing a photograph,” said Mr. Leiter’s assistant, Margit Erb, who confirmed his death, at his home. “He put things into the abstract, he paid attention to color, he threw foregrounds out of focus, which made the photographs feel very voyeuristic. He applied a painterly mentality that the photography world had not seen.”

“Color wasn’t really accepted as an artistic medium at that time,” Ms. Hostetler said. “Because of the nature of the development of the technology of color photography, the association in people’s minds was with commercial or amateur photography.”

With no art market for color photos, Mr. Leiter earned his living as a fashion photographer for magazines like Esquire and Harper’s Bazaar. His work in those pages looks nothing like other commercial images of the period: models’ faces are often partly obscured; a featured product — a pair of shoes, for instance — might be shown half in shadow.

Mr. Leiter made few prints of his art photographs: it was enough for him, he said, to show slides of them to small gatherings of friends, projecting the images onto his living room wall. He roamed the streets daily with his camera, and he continued to paint. In some works he merged the two mediums, adding layers of paint atop his already layered photographic images.

And so things went, for six decades. For all that time, Mr. Leiter remained virtually unknown, “partly by choice, partly by happenstance,” Mr. Leach said on Wednesday.

“So many photographers, they go out of their way to publicize themselves and to search out success,” he added. “Saul never did it. He photographed because he loved taking photographs.”

One of the most effective gestures in Leiter’s work is to have great fields of undifferentiated dark or light, an overhanging canopy, say, or a snow drift, interrupted by gashes of color. He returned again and again to a small constellation of subjects: mirrors and glass, shadows and silhouettes, reflection, blur, fog, rain, snow, doors, buses, cars, fedoras. He was a virtuoso of shallow depth of field: certain sections of some of the photographs look as if they have been applied with a quick brush. It will come as no surprise to a viewer of his work that Leiter was also a painter, that his heroes were Degas, Vuillard, and Bonnard, and that he knew the work of Rothko and de Kooning well. There are points of contact between his work and that of photographers like Louis Faurer and Robert Frank, the so-called New York School; but Leiter was an original. He loved beauty. To make a living, he photographed fashion spreads for Harper’s Bazaar and Vogue, and the levity of his commercial work seeped into his personal work.

Very down to earth, Saul Leitner was a man who had no desire to chase after the trappings of fame and fortune. In 2009, Leitner said in an interview with Dean Brierly in the blog, Photographers Speak (Saul Leiter: The Quiet Iconoclast):

I am not immersed in self-admiration. When I am listening to Vivaldi or Japanese music or making spaghetti at three in the morning and realize that I don’t have the proper sauce for it, fame is of no use. The other way to put it is that I don’t have a talent for narcissism. Or, to put it yet another way, the mirror is not my best friend. [Laughs]

Asked in the same interview, What was the biggest challenge in developing a personal style?, Leiter has a great answer: “I wasn’t challenged. The style, if there is any, was just the result of working in photography. I wasn’t immersed in challenges.” In other words, instead of consciously chasing after a defining “style,” Leiter, like all great artists, just did the work that interested him, in both photography and painting, and the “style” that emerged is merely the result of him being true to himself and to his medium. And Leiter has no apologies for being a seeker of beauty wherever he can find it, as seen in his answer to Dean Brierly’s question (in bold):

Color is obviously a big part of your aesthetic, yet I think it sometimes obscures other concerns. For example, the people in your photographs are often hemmed in, fragmented or isolated from one another. Do you see the urban environment as a kind of alienating or isolating entity? I never thought of the urban environment as isolating. I leave these speculations to others. It’s quite possible that my work represents a search for beauty in the most prosaic and ordinary places. One doesn’t have to be in some faraway dreamland in order to find beauty. I realize that the search for beauty is not highly popular these days. Agony, misery and wretchedness, now these are worth perusing.

Saul Leiter was very pragmatic, and not hung-up on being perfect, as he tells Brierly:

I experimented a lot. Sometimes I worked with a lens that I had when I might have preferred another lens. I think Picasso once said that he wanted to use green in a painting but since he didn’t have it he used red. Perfection is not something I admire. [Laughs]. A touch of confusion is a desirable ingredient.

Teju Cole beautifully summarizes the effect of Leiter’s work and what makes it so magical and mysterious:

The content of Saul Leiter’s photographs arrives on a sort of delay: it takes a moment after the first glance to know what the picture is about. You don’t so much see the image as let it dissolve into your consciousness, like a tablet in a glass of water. One of the difficulties of photography is that it is much better at being explicit than at being reticent. Precisely how the hypnotic and dreamlike feeling is achieved in Leiter’s work is a mystery, even to their creator.