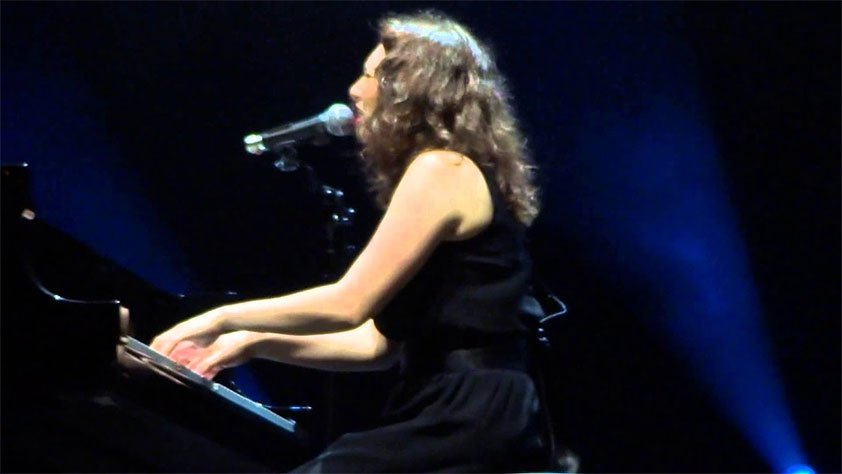 There was a great Terry Gross interview with Regina Spektor on Fresh Air recently (On Growing Up A ‘Soviet Kid’). During the broadcast, Terry played Spektor’s recording of the song, “The Prayer of François Villon (Molitva),” by the Russian poet and singer-songwriter Bulat Okudzhava. The song appears on the Deluxe Edition of Spektor’s new album, What We Saw From The Cheap Seats.

It’s a beautiful, haunting song, as you can hear in this video:

“The Prayer of François Villon (Molitva),” translated into English

As long as the world’s still turning,
As long as the air’s still sweet,
Lord, won’t you give to all of us
Whatever it is we need.
Give a mind to the wise one,
A shield to the enemy,
Give some gold to the happy man,
And don’t forget about me.

As long as the world’s still turning,
Lord, if it be your will,
Give to the hungry for power
A kingdom to rule his fill.
Give some rest to the generous
Under a shady tree,
Wash the stain from the face of Cain,
And don’t forget about me.

I know that your powers are wondrous,
I believe that your ways are wise,
The way that a fallen soldier
Believes he’s in paradise,
The way every breathing being
Believes in your gentle word,
The way, in our utter oblivion,
We keep on believing, oh Lord.

My all-wise, my all-merciful,
My sweet Lord of sea-green eyes,
As long as the world’s still turning
To its eternal surprise,
As long as it still has plenty of
Fire and destiny,
Give a little to everyone,
And don’t forget about me

The author of the Prayer

Bulat Shalvovich Okudzhava (May 9, 1924 – June 12, 1997) was, notes Wikipedia, “a Soviet and Russian poet, writer, musician, novelist, and singer-songwriter. He was one of the founders of the Russian genre called ‘author song’ (авторская песня, avtorskaya pesnya). Okudzhava was born in Moscow and died in Paris. He was the author of about 200 songs, set to his own poetry. His songs are a mixture of Russian poetic and folksong traditions and the French chansonnier style represented by such contemporaries of Okudzhava as Georges Brassens. Though his songs were never overtly political (in contrast to those of some of his fellow bards), the freshness and independence of Okudzhava’s artistic voice presented a subtle challenge to Soviet cultural authorities, who were thus hesitant for many years to give official sanction to Okudzhava as a singer-songwriter.”

Where are the snows of yesteryear, François?

The subject of Okudzhava’s poem, François Villon (c. 1431 –1464), was, notes Wikipedia, “a French poet, thief, killer, barroom brawler, and vagabond. He is perhaps best known for his Testaments and his Ballade des Pendus, written while in prison. The question ‘Mais où sont les neiges d’antan?’, taken from the Ballade des dames du temps jadis and translated by Dante Gabriel Rossetti as ‘Where are the snows of yesteryear?’, is one of the most famous lines of translated secular poetry in the English-speaking world. He was the best and most famous realist poet of the middle ages.”

The refrain, “And don’t forget about me,” from Okudzhava’s poem, reminds me, of course, of the incredible cover version of Harry Nilsson’s “Don’t Forget Me” by Neko Case, which I posted here a few month’s back. How could I forget?