A Fallen Flag is a rather poetic term that refers to a railroad company that is no longer in existence due to bankruptcy or merger. Since the late 1950s the North American railroad industry has undergone an epic brand consolidation. In fact, presently only four Class I railroads still exist under their original names. The surviving brands are the Canadian National Railway, Canadian Pacific Railway, Kansas City Southern Railway, and Union Pacific Railroad. Why is this important? I am not sure, but I came across this logo of a Fallen Flag while on a recent stroll and did a little research. Yes I read cereal boxes as well. 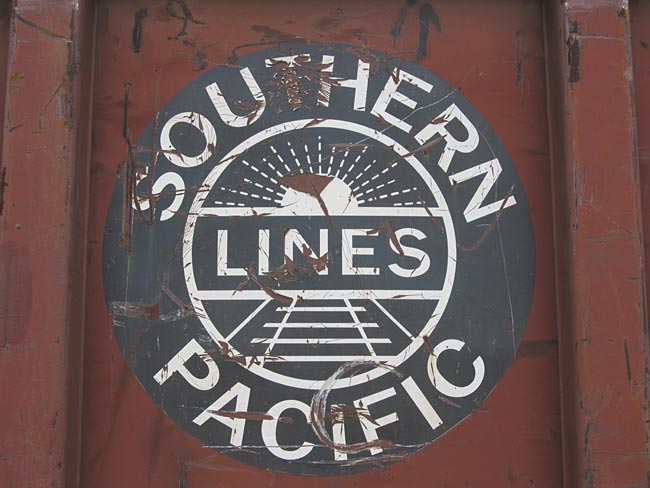 1959: Southern Pacific moved more ton-miles of freight than any other US railroad.

1965: Southern Pacific’s bid for control of the Western Pacific is rejected by the ICC.

1967: SP opens the longest stretch of new railroad construction in a quarter century as the first trains roll over the Palmdale Cutoff through Cajon Pass.

May 1, 1971: Amtrak takes over long-distance passenger operations in the United States; the only SP revenue passenger trains thereafter were the commutes between San Francisco and San Jose.

1996: The Union Pacific Railroad finishes the acquisition that was effectively begun almost a century before with the purchase of the Southern Pacific by UP in 1901, until divestiture was ordered in 1913. Ironically, although Union Pacific was the dominant company, taking complete control of SP, its corporate structure was merged into Southern Pacific, which on paper became the “surviving company”; which then changed its name to Union Pacific.

1996: The merged company retains the name “Union Pacific” for all railroad operations.