“There is no future for e-books because they are not books. E-books smell like burned fuel.”
~Ray Bradbury, June 2008

(Sources: Marketplace.org and Simon and Schuster)

A few months ago I blogged about Flavorwire’s previous collection of Stanley Kubrick photos from Chicago, circa 1949. Now they’re at it again, having posted a new group of 15 Kubrick photographs from New York City in the 1940s. 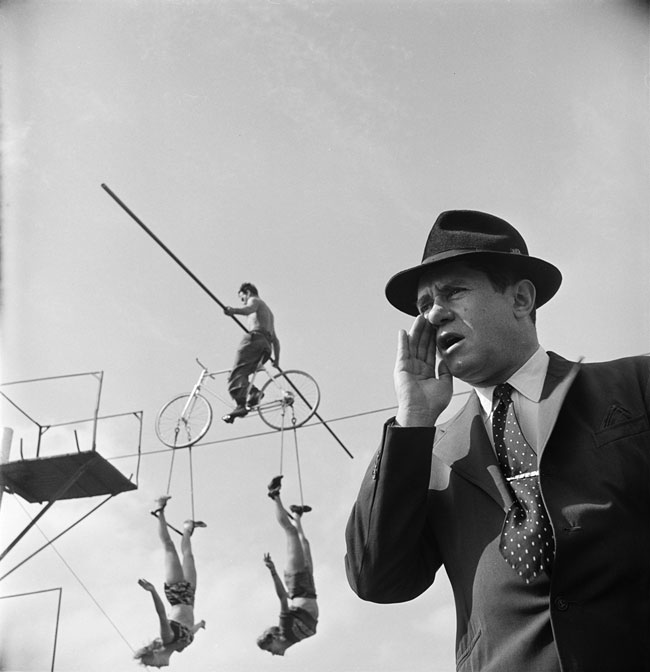 …Stanley Kubrick was a poor kid from the Bronx who worked as a photojournalist for Look magazine. (He was their youngest staff photographer on record.) Kubrick’s striking black and white images of 1940s New York City — which were often shot on the sly, his camera concealed in a paper bag with a hole in it — hint at the dark beauty and psychological drama of his later creative output.

They also note that Kubrick took some 10,000 photographs, most never before seen. Check out the 15 Kubric NYC photos on view, and watch the future director training his eye and learning the craft of visual narrative.

An interesting article in today’s New York Times, On the Move, in a Thriving Tech Sector, follows the progress of one of many new startups based in New York City, from birth to growth and eventual venture capital funding and expansion. From a naming point of view, this startup’s name, Yipit, though not terrible, illustrates the pitfalls when brand naming is driven by the requirement to have a matching, short domain name available for registration. So few such names are left, that they are by definition becoming more convoluted. As the article notes,

Even their corporate identity — their name, Yipit — was the product of a trial-and-error process, albeit one of a specifically digital sort. Mr. Moran said he and Mr. Vacanti had wanted a name with noun-like solidity but with the snappiness of a verb. “We wanted to be able to say, ‘Something-It!’ ” he said.

The trouble was that neither man knew what that “something” was. So they created a computer program that generated all possible English-language compounds composed of a three-letter, consonant-vowel-consonant prefix and “it.” Yipit, Mr. Moran said, was the only one that was both pronounceable and unclaimed on the Internet’s domain registry.

Obviously, if “yipit” was the “only name left” that fit their somewhat arbitrary process filter, then that’s one more avenue exhausted for the next startup that tries to do naming by a similar process, with a similar filter in place. Naming that is driving by such restricted domain name requirement filters — what we call the “domain domination blues” — is a zero sum game, and while it’s not impossible to achieve good results when playing this game, it is getting more difficult every day.

On the other hand, this same article mentions another young company, General Assembly, a “communal office campus” where Yipit incubated before recent VC funding allowed them to move into their own office space. General Assembly is a perfect name for this company, a name that works on multiple levels, and we celebrate it in an entry in The Compendium of Amazing Names (CAN).

All undone on an unmade bed. Blossoming Snoopy in Seine. Madame world leader put a spell on you, funny sun. Hold on…I have Ohio on the other siren. Today’s YouTube music playlist, FridaySongs 11, features these 32 smoldering tracks:

About ten or so years ago I snapped the recently re-discovered photograph below through the window of a closed art gallery in Pt. Reyes Station, California. I shot it using black and white film (i.e. analog).  The text is a framed story hanging on the gallery wall near the window, which I noticed as I walked by. Reflected in the window glass is a handrail, the street, the house across the street and some trees. The story on the wall is by a four year old named Trae, and I can’t remember if this story was a caption for the framed artwork hanging directly above it, the bottom of which you can see in the photograph, or if the story stood on its own, framed as a work of art, because that’s exactly what it is: 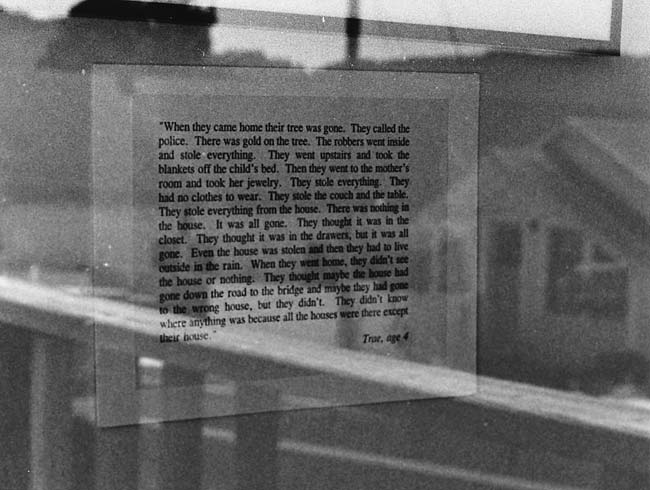 This is a compelling, very well-written story, and if it really is by a four year old (which I believe and desperately want to believe), it is truly amazing. As I said, the gallery was closed at the time, so I couldn’t find out any details, and I’ve never seen this online. Trae writes like Samuel Beckett, and this little story has great depth and mystery. Here is the full text of Trae’s story, taken directly from the photograph:

“When they came home their tree was gone. They called the police. There was gold on the tree. The robber went inside and stole everything. They went upstairs and took the blankets off the child’s bed. Then they went to the mother’s room and took her jewelry. They stole everything. They had no clothes to wear. They stole the couch and the table. They stole everything from the house. There was nothing in the house. It was all gone. They thought it was in the closet. They thought it was in the drawers, but it was all gone. Even the house was stolen and then they had to live outside in the rain. When they went home, they didn’t see the house or nothing. They thought maybe the house had gone down the road to the bridge and maybe they had gone to the wrong house, but they didn’t. They didn’t know where anything was because all the houses were there except their house.”
–Trae, age 4

I love the ambiguity of “they,” which keeps shifting back and forth between referencing the “family” that has just returned home to no home, and the “robbers” who apparently stole everything this family owned, even their tree. The tree itself had gold “on” it, though we cannot know for sure if that was before or after it was stolen (“golden” before, or only “golden” now that it’s missing, like a precious memory?). Finding the “golden” tree missing, the family calls the police, only to have the story flashback to describe the “robber” (singular), systematically going through the house and stealing everything the family owned, beginning with the blankets from the “child’s” bed. It’s like the theft of all presents and decorations in How the Grinch Stole Christmas, though here it’s more sinister — all identity is being systematically erased. END_OF_DOCUMENT_TOKEN_TO_BE_REPLACED

This made my day. A truly inspired, beautiful video that perfectly captures the spirit of this great song and also makes sign language look very cool. Great work, kids!

Produced by D-PAN, the Deaf Professional Arts Network. American Sign Language Direction by Ronald Dans. Directed by Nicholas Hill of Lucky Airlines. Here are the lyrics to “We’re Going To Be Friends”: END_OF_DOCUMENT_TOKEN_TO_BE_REPLACED

We can fly away tonight and do something to the clouds. Today’s YouTube music playlist, FridaySongs 9, includes a big lineup with some great live tracks: