We’ve been saying this for what seems like forever. In this savage economic climate, more and more businesses are realizing how important it is to get their branding right, and are looking for any way they can to add a few percentage points to their bottom lines. An article in today’s Washington Post, Businesses find they can’t grow without branding, highlights the trend in the Washington DC area:

In the Washington area, Honest Tea is far from alone in seeking a brand make-over. The business of image enhancement is heating up in the region — and not just among companies selling consumer products. Government contracting firms are adopting new nomenclatures that create buzz. Charities are changing their names to reflect new missions. Trade associations are updating their logos and tag lines to remain relevant to members.

We are seeing this shift happen all over, not just in Washington DC, and the key reason for it is the massive change that many markets are undergoing:

“As a result,” Susko added, “everybody is trying to figure out their place in the new market.”

One of the primary drivers of this trend is a big push toward “authenticity” — think of it as the “Get Real” movement. Ironically, the article leads off with the story of Honest Tea ditching its old tagline of “Get Real. Be Honest.” For the the beverage maker to really “Get Real,” they had to ditch their old approach of telling people to get real, because true authenticity means never having to say you’re authentic! (They were also honing their message after expanding into new markets thanks to new owner Coca-Cola.) The article speculates that the reason for this is the pervasiveness of media, social and otherwise, that will expose any corporate hypocrisy in an Internet heartbeat:

These days consumers are driving the public perception of companies, offering their sometimes not-so-flattering reviews of products and services through blogs, Web sites and social media. Companies are responding to the public’s demand for transparency; in this era of the 24/7 news cycle, consumers no longer are tolerating firms that represent one thing in their branding but demonstrate something entirely different in news coverage, experts say.

“There is so much information available to us and we can make up our own minds” about companies, said Susan Waldman, partner for strategic services at the Washington-based branding firm ZilYen. (Her business is thriving. The firm’s revenue from March to May, she said, surpassed what it made during the entirety of 2010.)

“Now the whole company is really being charged with standing behind the values claimed in the marketplace,” Waldman said. “Everything you do and say becomes part of what audiences see as your brand.”

And of course, the top-level of any company’s marketing will be their name:

A key element in a company’s branding is what it calls itself. Business nomenclatures of the past were more straightforward; firms typically were named for their founders or the services they provided. Now names are much more creative — consisting of made-up words, atypical spellings and odd combinations of capital and lower-case letters: strEATS, QinetiQ, Opower, PopVox, 20/20 GeneSystems, JESS3. Today’s names are designed to stand out, create buzz and reflect innovation.

Unfortunately, most such attempts, as the examples above show, fall short in their ability to stand out in an increasingly crowded marketplace where most companies are doing the same thing at the same time.

Authenticity, like a great name, is a quality your brand can only demonstrate, not explain. What you fail to demonstrate directly you have to explain, and that’s called advertising. More and more, consumers are onto brands that try to use advertising to pull a fast one, and crave authentic brands.

When it comes to your name and primary messaging, keeping it real is a must, and something you just can’t fake.

With New York leading the charge, our urban neighborhoods have been linguistically sliced and diced into countless SoHos, Tribecas, Nolitas, and Somas, but left to their own devices, real estate marketers are going to push this trend into ever more ridiculous dimensions. Witness “ProCro,” a new coinage for the mash-up of the New York neighborhoods Prospect Heights and Crown Heights. New York Magazine has a good article about this ProCro business, Hell No, Portmanteaux, with a nice summary of what portmanteau words are and from whence they sprang (Down the rabbit hole, Alice!):

The term describes “two meanings packed up into one word,” as Humpty Dumpty tells Alice. The result may be efficient (pluot, podcast), inane (sexpert), or depraved (cremains). At their most effective, portmanteaux are absorbed into the lexicon so smoothly as to become unrecognizable (electrocute, motorcade) as the Frankensteins they are. At bottom, they should describe a new thing (a test guesstimate fails), and, indeed, facilitate its existence. Large servings of French toast eaten at noon were just that, until someone came up with brunch.

The ProCro portmanteau, a true civic blivet, has pushed enough buttons as to make one New York State assemblyman, Hakeem Jeffries, a Brooklyn Democrat, push for regulation that would force new neighborhood names to be approved by the city. The article makes the fine point that this is unnecessary, as language itself will moderate the practice of overcoinage (overcoin? overcoining?):

Still, regulating such coinages seems unnecessary—not when the language does that on its own. ProCro, after all, sounds like a name for a mixed-use fertility ­clinic–cryogenics lab. Who’d want to call such a place home?

And that’s what it all comes down to: Do I really want to tell people that I come from a place called “ProCro”? Soho, sure, and Tribeca too. But not ProCro. The other deciding factor here is that  successful neighborhood names tend to come about organically over time, driven from the ground up as street slang, not from the top down as a marketing initiative.

Sick joke of the week: Two pharma companies specializing in gastrointestinal diseases, Axcan & Eurand, walk into a bar and merge. When they come out, they are called Aptalis. Which means EuCan and Axrand are now available!

I just did a quick search of the USPTO and found 424 living and dead trademarks for the exact phrase, “American Dream.” Here’s some free advice to any company considering the name “American Dream” for their business: don’t. For any naming project, its important to do your research and know what the competitive landscape, so you don’t end up with the futile task of trying to peddle your “unique” products or services under the banner of a name that is anything but unique. In other words, don’t be an accidental hypocrite.

That’s not to say that you can’t turn a cliche on its head to create a great name, as Ben & Jerry’s did with their ice cream flavor, “Stephen Colbert’s Americone Dream.”

R.I.P Cy Twombly, one of the greatest contemporary painters, who died today in Rome at the age of 83. You can look at numerous images here of Twombly’s work, but you really need to see them in person. We all do. 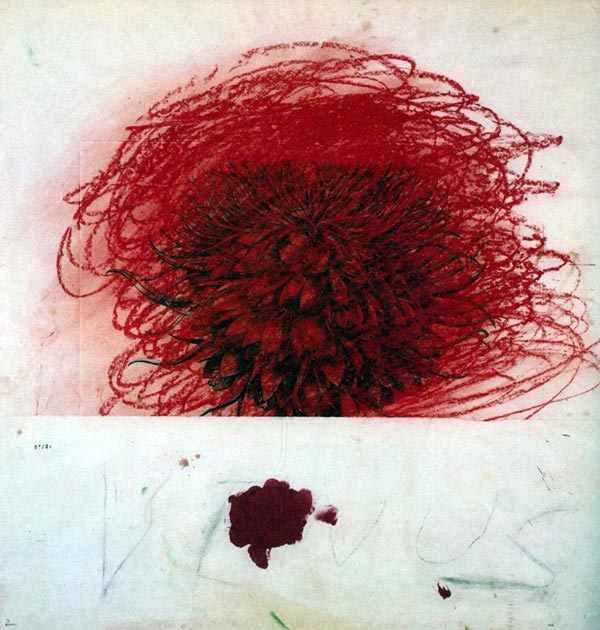 Wall paint manufacturers have realized that, with thousands of colors to choose from in each product line, it doesn’t make any sense to give all those colors descriptive names. So they have been busy creating evocative names that evoke emotions and stories for the consumer, according to a recent article on the New York Times, We Call It Brown. They Call It ‘Weekend in the Country.’ And the strategy is working:

In a redoubled effort to capture consumers’ attention in this sputtering economic recovery, some paint companies are hoping to distinguish their brands with names that tell a story, summon a memory or evoke an emotion — even a dark one — as long as they result in a sale.

What they do not do is reveal the color.

“For a long time we had to connect the color name with the general color reference,” said Sue Kim, the color trend and forecast specialist for the Valspar paint company. “But now,” Ms. Kim added, “we’re exploring color names that are a representation of your lifestyle.”

Kudos to the paint industry for injecting a little poetry into a consumer product category, and for not shying away from names with darker connotations and negative meanings, such as “Turbulence,” “Tornado Watch,” “Arsenic,” and even “Dead Salmon,” which is also playful and has a double meaning for its British consumer base:

And then there is Dead Salmon, a taupe-like color from Farrow & Ball, the English paint company. Sarah Cole, the company’s marketing director, explained that the word “dead” in Britain means matte. Has the company considered dropping the “dead” for its American audience? No, Ms. Cole said. “It’s fun, and people pick up on it.” (The company also offers Arsenic.)

Yes! People enjoy the playfulness, and don’t for a second think that the paint is going to make their dining room smell like dead fish (though, depending on the hue, it may look like dead fish). The paint company Valspar employs a whole division of “colorists” whose primary job it is just to name paint colors. (Again, kudos for keeping more namers off the streets!) Here is a description of a typical Valspar naming session that led to one of my favorite names in this article, “Metro at 5,” emphasis mine:

At a recent session to name a light green color, they started with this description: “Misty green; in motion; anticipation for next stop.” She said this led to storytelling that prompted chatter about sightseeing in Europe, guidebooks and subway maps. It soon yielded a working title, to be refined at a later date: Metro at 5.

And what if the name makes no sense to the consumer?

“I am perfectly fine if a certain name gives them a perplexed, thoughtful moment,” Ms. Kim said, “if the three-second glance gets us another five seconds as they pause to think, ‘Why is that Metro at 5?’ I think that’s a good thing.”

Absolutely, Ms. Kim, you are right on! This is the first job that a great name performs, to make the consumer slow down and “pause to think” — once they’ve done that, their minds are open and they are receptive to your brand.

Tellingly, the article ends with some quips from a 25-year old woman shopping for paint at Home Depot, who even though she has a skeptical, sarcastic reaction to the names, nevertheless is prompted by one to remember a story from her family’s past:

But she did pause at a color named Lightweight Beige, and soon she was telling a story about when her parents met. Her father told her mother that he liked her in beige, and so she swapped her once-colorful wardrobe for one that was all beige.

People are hungry for stories, for emotion, for language that takes risks rather than just pandering to the lowest common denominator. A great name can be as simple as a single word that paints a thousand pictures. The consumer paint industry clearly gets it, but these things are true for nearly every industry.

From the Naming & Branding Manifesto, number 1: As you embark on the adventure of naming your company or product, you have the opportunity to create a Big Bang or a little whimper. Do the right thing – make a Big Bang.